‘We fought until the end’


Jayson Castro puts TNT on his back with arguably his finest performance in recent years, but he concedes that newly crowned PBA Philippine Cup champion San Miguel is simply too strong

MANILA, Philippines – Not even a herculean effort from Jayson Castro could lift TNT past San Miguel in the PBA Philippine Cup finals.

Castro conceded that the Beermen were simply too powerful as the Tropang Giga fell short in their bid to repeat as All-Filipino champions following a crushing 119-97 loss in the winner-take-all Game 7 on Sunday, September 4.

Back in action after missing Game 6 due to a sprained ankle, the 36-year-old veteran saved the best for last by churning out a conference-high 32 points on top of 10 rebounds and 8 assists. Those numbers were double his finals averages in the first five games, where he normed 16.2 points, 3.2 rebounds, 2.8 assists.

His near triple-double outing, though, went down the drain as San Miguel beat TNT to a pulp in the decisive fourth quarter, with the former champions getting outscored, 35-8.

“We fought until the end. But they’re really strong,” Castro said in Filipino. “We cannot stop their second group. Even if we managed to stop them, they always had a counter for us.”

“Congratulations to San Miguel. They deserved to win the championship.”

Battered and all as he also hurt his shoulder in Game 7 following a collision with Marcio Lassiter, Castro fought through the pain and delivered arguably his finest performance in recent years.

Castro erupted for 19 points in the third quarter as he singlehandedly outscored the Beermen by a point in the period to give the Tropang Giga an 89-84 lead going into the final salvo.

TNT, however, crumbled in the fourth frame and allowed San Miguel to erect a scorching 17-0 run at the start of the period.

By the time Castro ended the scoring drought for the Tropang Giga, it was already too late as the Beermen opened the floodgates en route to the most lopsided Game 7 in PBA finals history.

“I’m hurting in a lot of places, but I needed to play. At the same time, I needed to help the team the way I can,” Castro said.

Although downcast from another finals loss – the third for the Tropang Giga over the last six conferences – Castro vowed they will continue their chase for the crown.

“This is a learning experience for us, so the next time we make a run for the championship, we will have something to look back on,” Castro said. 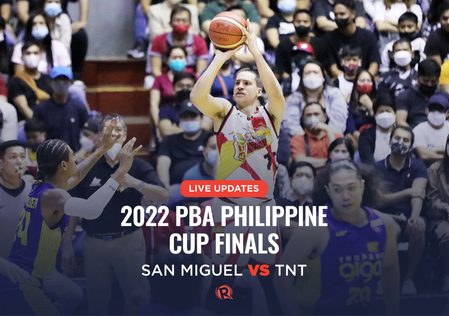 Dzanan Musa: "We’ll give our everything"

"I always carry this chip on my shoulder"

Extending the Hall of Fame’s reach

Andy Murray, Cameron Norrie and Dan Evans could all be in contention for the tieGreat Britain have...

NHL Rumors: Patrick Kane will be talking to the Blackhawks sooner than later about his playing future

Extending the Hall of Fame’s reach