Former US Open quarterfinalist Alex de Minaur has made a winning start to his 2022 singles campaign. 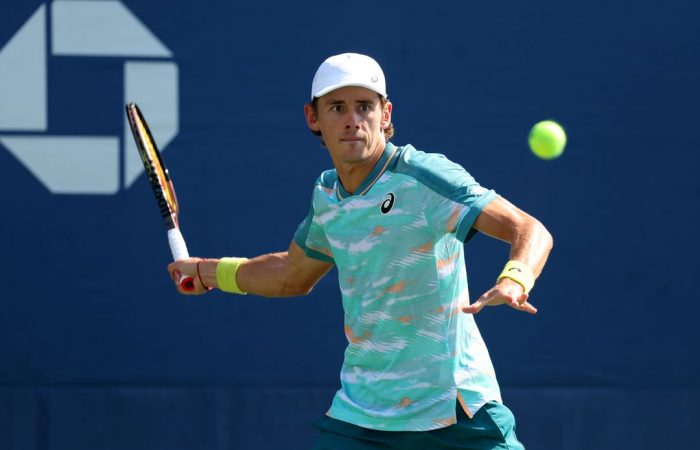 Alex de Minaur moved into the second round of the US Open today after seeing off a wayward Filip Krajinovic.

De Minaur, the 18th seed, beat the Serb 7-5 6-2 6-3 to set up a second-round meeting with Cristian Garin, the Chilean who stopped him in five sets at Wimbledon.

“At times I expect perfect tennis out of myself. Reality of the sport is that it’s not always going to come, so it’s about adapting and kind of just being able to accept mistakes. That’s for me the biggest thing.

“Happy to get a win against a tough opponent. Nice, hot, quick, swirly conditions. It wasn’t, as I would call it, beautiful tennis. But I did exactly what I needed to do and very happy to be in the second round.”

Millman battled for almost four hours before Nava struck a 63rd winner to set up a second-round meeting with 2012 champion Andy Murray.

De Minaur faced a tough prospect in Krajinovic, a former world No.26 who has historically thrived on fast courts.

But the Aussie 23-year-old brought impressive form of his own into this match, having won the Atlanta ATP title and seven of his past 10 matches.

He fell behind an early break before winning seven of the next 10 games to take the first set, and raced ahead 4-1 in the second thanks to a beautifully-struck drop shot.

Krajinovic dumped a groundstroke into the net – one of 50 unforced errors he would commit throughout the match – to hand De Minaur a two-sets-to-love lead.

De Minaur faced challenges in the third; he surrendered serve early to fall behind 2-0, and later trailed 0-40 when attempting to serve out the match.

But he rose to meet those challenges, completing his first-round assignment in exactly two hours.

“The one thing I would say coming into this match I probably haven’t had before is the confidence in myself that I’m very tough to beat over five sets if I’m there competing every single point. Especially in hot conditions,” De Minaur said,

“If I play Garin (next), then hopefully I can get some revenge. But either way it’s just another tennis match. Hopefully I can go out there and play some good tennis and get the win. That’s all I care about.”

For Millman, his match was one in which he was always playing catch up against the Australian Open 2019 boys’ singles finalist.

He went down a break in the first set, fell behind two sets to one, and trailed 3-1 in the fifth after double-faulting to lose the game.

But as always, he fought.

He could have slumped as the fifth set slipped away from him; the hyper-aggressive Nava pounded a flurry of winners from the baseline to move ahead 4-1, before Millman bogged him down in a game that extended to 10 deuces and almost 15 minutes.

Yet Nava scorched a backhand return winner to eventually break for a 5-1 lead, and sealed victory in a touch under four hours with another clean winner.

Millman, who advanced to the quarterfinals at Flushing Meadows in 2018, finished with less than half Nava’s winner tally.

Aussies in action – US Open

5 Amazing Leadership Lessons You Can Learn From Volleyball

John Wall gets real on personal struggles he faced in the past few years: 'At one point in time I thought about committing suicide'

NHL Rumors: J.T Miller talks about the trade rumors and his contract situation