US Open 2022: Aussies determined to continue winning runs on day five | 2 September, 2022 | All News | News and Features | News and Events


Alex de Minaur, Nick Kyrgios and Ajla Tomljanovic are among 10 Australians scheduled to compete on day five at Flushing Meadows. 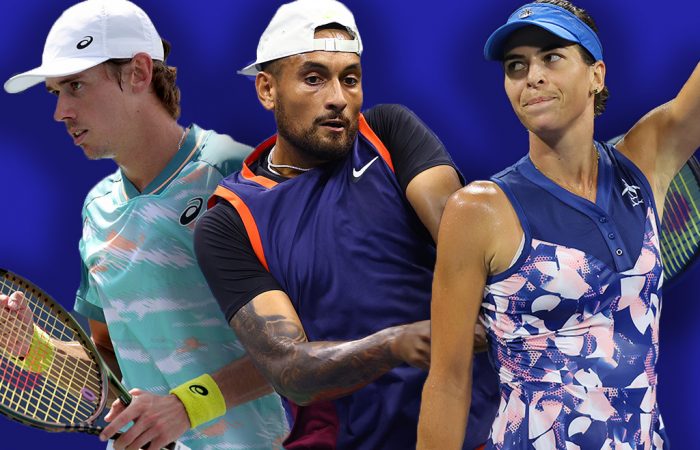 Australia’s top-three ranked singles players – world No.20 Alex de Minaur, world No.25 Nick Kyrgios and world No.46 Ajla Tomljanovic – have all advanced to the third round at this year’s US Open.

Each member of the trio is in action again on day five, facing contrasting challenges as they look to progress further at Flushing Meadows.

Tomljanovic faces American favourite Serena Williams, who is competing in her final Grand Slam tournament and attracting record – and raucous – crowds each time she steps on court.

“It will definitely be something I have never experienced,” admitted Tomljanovic, who is set to compete on Arthur Ashe Stadium for the first time.

> READ: Tomljanovic – Serena “inspired me to go for my dreams”

Kyrgios also faces an American, J.J. Wolf. The 23-year-old wildcard is enjoying a career-best run at a major tournament.

“I’m going into that probably the favourite, but I’m not going to take him lightly at all,” Kyrgios said. “I know he’s beaten some great players.”

“He’s obviously playing some great tennis,” De Minaur acknowledged. “It’s going to be a battle. I’m looking forward to it.”

With doubles competitions also continuing, there are 10 Australians in total scheduled to compete on day five.

The US Open is broadcast on the Nine Network and Stan Sport in Australia, with coverage beginning from 1am AEST.

[18] Alex de Minaur (AUS) v [12] Pablo Carreno Busta (ESP)
Men’s singles, third round, Grandstand, fourth match (not before 7am AEST)
De Minaur has advanced to the third round in New York for the fourth time in his career. The 23-year-old Australian, whose best US Open result is a quarterfinal run in 2020, now faces in-form Carreno Busta. The 31-year-old Spaniard, a two-time US Open semifinalist, won his biggest career title at Montreal last month. Although they have only met once previously at tour-level, world No.20 De Minaur and world No.15 Carreno Busta often train together in Spain and have teamed up before in doubles.
Head-to-head record: Carreno Busta leads 1-0
Last meeting: Carreno Busta won 6-3 6-1 6-1 (Roland Garros, May 2019)

Ajla Tomljanovic (AUS) v Serena Williams (USA)
Women’s singles, third round, Arthur Ashe Stadium, night session, first match (from 9am AEST)
Tomljanovic is in career-best form and credits embracing nerves for her recent success. Managing those nerves could prove key for the world No.46 in the third round, where she faces Williams for the first time. “It’s going to be a huge moment,” said the 29-year-old Australian. “I’ve been a Serena fan since I was a kid.” This is Williams’ 21st appearance in the US Open third round. She has only lost at this stage of the tournament once before, in her 1998 debut. “I’ll try my best to win,” said Tomljanovic.
Head-to-head record: First career meeting

[23] Nick Kyrgios (AUS) v [WC] J.J. Wolf (USA)
Men’s singles, third round, Louis Armstrong Stadium, night session, second match
Kyrgios has progressed to the US Open third round for the fifth time in his career. However, the world No.25 is yet to advance beyond this stage. Standing in the 27-year-old Australian’s way of a fourth-round berth this year is world No.87 J.J. Wolf. The 23-year-old American wildcard, who eliminated No.16 seed Roberto Bautista Agut in the opening round, is aiming to advance to the fourth round at a Grand Slam tournament for the first time. “I know it’s not going to be easy at all,” Kyrgios said.
Head-to-head record: First career meeting

Luke Saville (AUS)/Aslan Karatsev v [1] Rajeev Ram (USA)/Joe Salisbury (GBR)
Men’s doubles, second round, Grandstand, first match (from 1am AEST)
Saville scored his first US Open doubles win this week, with the 28-year-old Australian defeating a former world No.1 (Lukasz Kubot) in the opening round. The world No.93, who is teaming with world No.94 Karatsev, now faces the world’s current top two-ranked players. World No.1 Salisbury and world No.2 Ram are also the defending champions.

Sam Stosur (AUS)/Matt Ebden (AUS) v Andreja Klepac (SLO)/Santiago Gonzalez (MEX)
Mixed doubles, first round, Court 10, second match
Stosur and Ebden are a formidable team, advancing to two Grand Slam finals (Australian Open 2021 and Wimbledon 2022) together. World No.20 Stosur is competing in US Open mixed doubles for only the fifth time in her storied career, while world No.34 Ebden is making his mixed doubles debut in New York.

[4] Storm Sanders (AUS)/John Peers (AUS) v [WC] Catherine Harrison (USA)/Robert Galloway (USA)
Mixed doubles, first round, Court 13, second match
Aussie duo Sanders and Peers are teaming up for the first time. This is world No.21 Sanders’ second career appearance in a US Open mixed doubles draw, while experienced world No.10 Peers is making his seventh. The 34-year-old Peers has reached the mixed doubles quarterfinals or better at all three previous Grand Slam tournaments this season.

[10] Ellen Perez (AUS)/Nicole Melichar-Martinez (USA) v [WC] Reese Brantmeier (USA)/Clervie Ngounoue (USA)
Women’s doubles, second round, Court 11, third match
World No.26 Perez and world No.17 Melichar-Martinez are in impressive form, winning 13 of their past 15 matches. The No.10 seeds, who won their first team title in Cleveland last week, face an American wildcard pairing of 17-year-old Brantmeier and 16-year-old Ngounoue, who scored their first Grand Slam-level wins in the opening round.

How To Fix Your Serve Toss – Essential Tennis Podcast #295

US Open Semifinal Preview: Jabeur vs. Garcia and Swiatek vs. Sabalenka

7 Best Lightweight Badminton Rackets on the Market in 2022

A Big Choice of Sports Betting on Your Smartphone!