Top 100 Outfielders For 2022 Fantasy Baseball: For The Children Edition 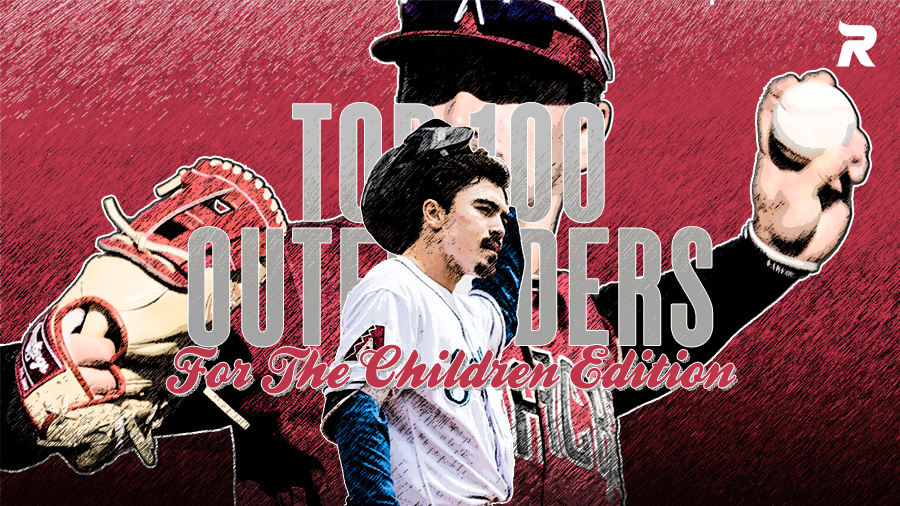 We’ve now reached September, welcome. You made it. All the roster rules are out the window now (not really) and many teams are calling the youth forward to get a taste. This is the home stretch for all who are in the hunt and officially crossed over to the “What have you done for me lately” portion of the season. The names of the players on your roster don’t matter anymore. I repeat, the names don’t matter anymore. Unless you are in a keeper/dynasty league, that player’s name and draft capital at the beginning of the season is now worth a grand total of ZERO.

Don’t be afraid to cut someone mired in a slump for someone who’s hot and playing favorable matchups (PIT, CIN, COL, etc). That’s right, TJ Friedl (playing in NL Central and home games at GAB) is worth more to you now than anyone who’s not hitting. You dig? SO… Take this chart with a grain of salt, and focus on who is hitting and who has good matchups. Anyway, here are a few guys that have caught my eye recently that you should be aware of:

Corbin Carroll – He was just called up a few days ago, and is THE hot commodity. He is not on this list because I have no data for him… but, he is everything you need until he’s not. This season in AAA he went 24/31/.307, so look at the big sparkly sign above my head, it reads: TOOLSY.

Jake McCarthy – Jake is off to a hot start in the desert (shock). So far going 6/12/.288 in his first 70 games is spicy. Over the last 2 weeks, he’s hitting a spicy .357 with 3 HR, 3 SB, and 12 RBI to boot. As long as he keeps hitting Chase Stadium is his oyster. The good news is, there is plenty of ABs to go around with an open DH spot. In that same regard, they are not calling up Carroll to stare at him on the bench, so he will play (as I stare at him on the bench tonight). Jake will continue to play too, they want a good look at their OF for next year.

Lars Nootbaar – “Lars! You got the right Nootbaar.” Sounds like a good 80s commercial tagline for him as he comes to stop after running on the beach to hold up his self-marketed candy/protein bar. He’s certainly been eating his protein bars over the last couple of weeks while hitting a cool .302 with 5 HR in a hot lineup (in a weak division) is a good recipe for anyone.

Franmil Reyes – Completely predictable to everyone not in the Cleveland front office. Reyes ate his way to the other side of the BABIP $54 steak and found his stroke again. Score one for the Cubs. In my home league I picked him up as soon as the Cubs claimed him, and then I called it quits for the day as I thought to myself, “I just had a better day than the Guardians organization.” Franmil is going to continue to eat in Chicago. September in Chicago, yes, please. Since joining the Cubs in 21 games he has 3 HR, cut his K rate down to 26.1%, and is batting a clean .277, check, please.

Luis Robert – I don’t have anything to really say, only that it makes me sad he’s not “healthy.” Seems like playing for the White Sox under TLR brings nothing but bad luck. Oh, and in the 3rd inning of a game he was allowed to hit like this:

Luis Robert grounding into a double play in the third. (AP) pic.twitter.com/txUxD9F5Bg

Yeah, Tony, maybe he should have been on the bench for that, that hand wasn’t right yet. Sigh… hopefully he’s back in the lineup soon for another strong September.

Luis Rengifo – The man does nothing but hit. Last time I told you to be on the lookout. He’s cut his K rate by 4% twice now and increased his SLG twice by .60 points. That’ll play. I think we got the makings for a solid .260+ hitter that can chip in a few homers and some bags. Not a world changer mind you, but a useful multi-position guy regardless and a decent MI to keep your eye out for next season if he finishes strong.

Jose Siri – He’s finally hitting, and as I had hoped, he’s playing nearly every day in CF. The Rays like to run, so for some cheap thrills with some wheels, I’d absolutely give him a run. He’s hitting .308 in the last 2 weeks with 2 HR, SB, and 12 runs scored despite hitting out of the 9 spot. 2nd leadoff hitter in action!

Tyler O’Neill – Captain Canada got his groove back. Sorta. He’s hitting .240 over the last 2 weeks with 5 HR, SB. Take what you can get right? His discipline looks like it’s headed in the right direction with a 12% walk rate over that time.

Riley Greene – He’s been hitting .390 with 2 HR on the Tigers. They have nothing to play for but staking a claim to a roster spot for next year. The first couple weeks of September include 6 games with KC and 3 @LAA.

Joey Meneses – Hitting .340 over the last couple of weeks. Only 1 HR to show for it, but a .545 SLG shows he’s still driving the ball well and could see more power coming soon. Not the most favorable matchups coming up, but hot is hot.

Giancarlo Stanton – Last but not least, Big Daddy Stanton is back for the playoff push. He’s only low on the list right now because he’s been on the shelf. It’s just a matter of time before he gets his timing back. I’m guessing that’s at some point next week during their 4-game set at home against the Twins (btw Yankees play a full 7-game spread next week with 6 at home).

As always, the individual ranks (and to a degree the dollars) don’t really matter, what’s important are the tiers, and more important than that now—your roster construction. Any outfielder not listed, consider them tier 5.

If you want more Coolwhip to top off your baseball experience, fantasy or otherwise, you can follow me on Twitter: @CoolwhipRB.

US Open: Rogers Reaches Third Round

Para events to be added to Junior Nationals

Featured in ITTF Magazine: Life Not Life Without Regret