Serena Moves Into Second Round


Serena Williams subdues Kovinic 6-3, 6-3 to reach US Open 2nd round

This was the first meeting between the two and to the delight of a packed, enthusiastic crowd in Arthur Ashe Stadium, it would not be Serena’s last. The 23-time grand slam champion had announced her impending “evolution away from tennis” in a first-person article in the September issue of Vogue magazine. Tickets were hard to come by after she confirmed her commitment to play in New York one last time and battle for that elusive 24th grand slam title.

Her opponent Danka Kovinic reached a career-high ranking of #46 in 2016 but due to a slew of injuries, was inactive on tour and is currently ranked #80. The 27-year-old from Montenegro has reached three finals and notched three top-ten wins in addition to defeating the reigning US Open champion, Emma Raducanu in the third round at this year’s Australian Open.

Williams won the toss and chose to serve. It was an inauspicious start for the 6-time US Open champion as she missed 5/8 first serves including two double faults. Although she faced two break points, she managed to hold for 1-0 following two consecutive aces and a netted forehand from her opponent. 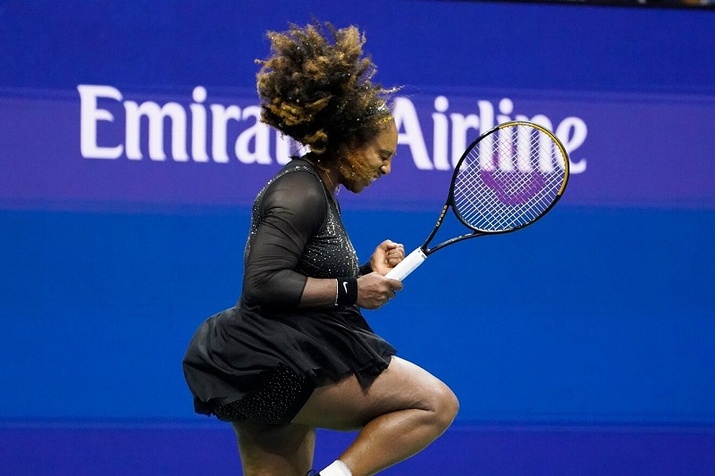 Kovinic opened with a spectacular crosscourt forehand but following two double faults, dropped serve after Williams hit a fantastic forehand swing volley. Williams, soon to be forty-one, missed 7/8 first serves including two additional double faults and gave back the break when she netted a forehand.

Kovinic opened the fourth with a marvelous inside-out forehand then an ace out wide and held to 30 for 2-2 despite gifting another double fault. While both struck the ball with power and conviction, their serves continued to betray them. Williams continued to alternate between aces and double faults and following two deuce and two break points, dumped serve after missing wide with the backhand.

Kovinic was unable to consolidate the break as she too hit an ace but then two consecutive double faults to drop serve. Level at 3-3, Williams seemed to settle down following a splendid overhead smash and held at love for 4-3.

Kovinic opened the 8th with a double fault and following three consecutive errors off the ground, dropped serve for 3-5. Williams served for the set, but it was far from easy as she faced five deuce and four break points. The former world #1 hit three aces and with another formidable serve up the tee, secured the set 6-3.

Kovinic served first in the second and continued to struggle as she opened with a double fault. Following several errors off the ground she faced two deuce and two break points yet held for 1-0 when Williams netted a backhand.

Williams made 3/5 first serves including her 7th ace and held easily to 15 for 1-1. Kovinic faced two deuce and two break points but with two aces and several errors from her opponent, held for 2-1.

Williams made 3/4 first serves and held at love for the second time following two consecutive winners off the ground. Kovinic opened the fifth with a remarkable forehand down the line but soon faced double break point and dropped serve after butchering an inside-in forehand. The crowd now louder than ever, sensed this was the moment Williams would shut the door on her opponent.

Williams opened the 6th with an incredible forehand down the line and though she donated a double fault, hit two consecutive aces and another forehand winner to consolidate the break for 4-2.

Kovinic battling Williams, the partisan crowd and herself, held comfortably to 30 for 3-4 with another ace and a crisp crosscourt forehand on game point. Williams serving with new balls, held at love for the third time with a brilliant backhand down the line. Kovinic, serving to stay in the match down 3-5, opened with a double fault and after three consecutive groundstroke errors lost serve and the match.

The crowd erupted in applause and rose to their feet; Serena Williams will play another day. The former world #1 last tasted grand slam glory in the Big Apple in 2014 and has not won a slam since securing her 23rd  while pregnant at the 2017 Australian Open.

Williams should be pleased with her overall performance as her stroke production, movement and confidence got better as the match progressed. She finished with 9 aces, 5 double faults and won 76% of first and 47% of second serve points while converting 5/11 break points.

Standing in her way of the third round is the #2 seed, Anett Kontaveit of Estonia. While the 26-year-old finished strong last season with four titles, she has recently struggled due to the effects of long- Covid. This will be their first tour-level meeting to be played in primetime in Ashe.

Rudy Fernandez: "Neither I at 37 nor Usman [Garuba] at 21 know if we’ll return to a Final"

How Far Should You Stand From the Ball at Address

“Oh, Crap” – How Danielle Collins Stared Down the Osaka Challenge in Round 1 at New York