Formerly designated a hurricane, the storm batters Caribbean islands earlier in the week, killing at least eight people and knocking out power for virtually all of Puerto Rico’s 3.3 million people

Experts predicted high winds, storm surges, and heavy rainfall from Fiona. Although a gradual weakening was forecast during the next couple of days, Fiona was expected to maintain hurricane-force winds until Saturday afternoon, the NHC said.

Formerly designated a hurricane, the storm battered Caribbean islands earlier in the week, killing at least eight people and knocking out power for virtually all of Puerto Rico’s 3.3 million people during a sweltering heat wave. Nearly a million people remained without power five days later.

A hurricane warning was in effect for much of central Nova Scotia and Prince Edward Island, home to more than 150,000 people, and parts of Newfoundland, the Miami-based NHC said.

Canadian Hurricane Center meteorologist Ian Hubbard said on Friday the effects of Fiona would be felt over a wide area. 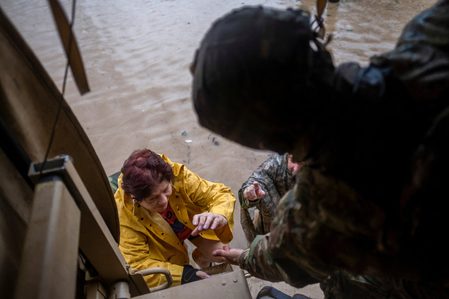 “The center of it is one thing, but the weather that’s associated with it in terms of the rain and where all the strong winds are, it’s going to be over a much larger area,” he said.

“Many, many places away from the center of the storm are still going to be seriously impacted from this,” Hubbard told Reuters.

There will be rough and pounding surf, with waves as high as 10 meters (33 feet) expected to hit the eastern shore of Nova Scotia Friday night.

“We’ve had a few before, but they say this is going to be the biggest of them all,” said Chris MacPhee, 53, of Sydney, Nova Scotia, who stocked up on groceries, batteries and candles. He said he was feeling “a little nervous, I guess.”

The storm could prove more ferocious than the benchmarks of Hurricane Juan in 2003 and Hurricane Dorian in 2019, Canadian Hurricane Center meteorologist Bob Robichaud told a briefing.

Trailing Fiona in the Caribbean is Tropical Storm Ian, which is expected to become a hurricane on Sunday night. The NHC said that a hurricane watch is in effect for Cayman Islands.

The storms Ian’s projected path takes it just south of Jamaica, over western Cuba and into Florida early next week, the hurricane center said.

Florida Governor Ron DeSantis declared a state of emergency on Friday, freeing up funding and emergency services in advance of the storm. – Rappler.com

Who are the Favorites in the Volleyball Championship League 2022?