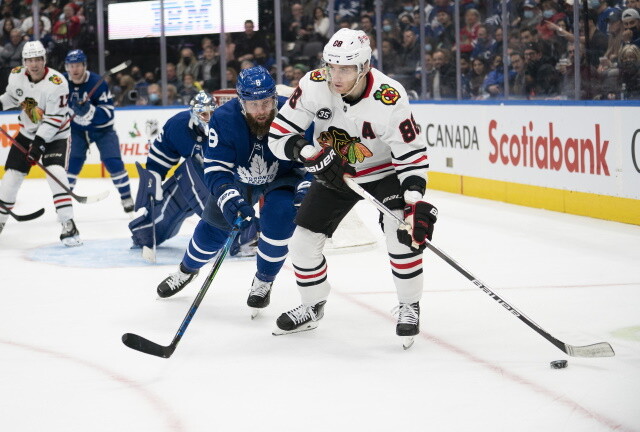 The Chris Johnston Show: Chris Johnston when asked if Patrick Kane is going to be traded to the Toronto Maple Leafs, and where the speculation came from.

“This is the perfect August hockey story. I won’t share who it was, but someone in the insider’s group chat, who’s obviously in a cottage in parts unknown, put in the group chat the other day, ‘hey, I was just going golfing and the starter of my course was asking about Patrick Kane and the Leafs rumors and what’s going on. What’s happening?’

I guess I understand where it comes from but I don’t really understand how anyone thinks that’s going to work in a salary cap world. I mean, we’re talking about the Leafs signing all these free agents for $1 million, bargain guys to fill out their roster and Patrick Kane carries a $10.5 million cap hit.

And even if there is some world where Chicago is eating half of that, I don’t really see how that works or makes sense.

I understand Chicago is absolutely gunning for the Connor Bedard sweepstakes, not trying to win a lot of games this season. Patrick Kane and Jonathan Toews are both in the final year, entering the final year of their contracts.

You know, maybe there’s a world down the road where you try to reunite Auston Matthews and Patrick Kane from the two best American players ever, arguably, but I just don’t see it as something that’s going to happen prior to this season.

If it does I’ll put my hand up and say I wasn’t doing my job but I don’t really think this is a thing.

Again, blue skying it, we’re in the summer, we don’t play by the rules yet at this point in time. I can see why people think there can be a fit there but you can’t build, it’s hard to build all-star teams in the NHL. It really is.

And we saw Colorado after winning their Cup and they have some of their best players on pretty team deals, they’re losing a Nazem Kadri after the season. They weren’t able to retain everyone. It’s unfortunately how it works.

And so I don’t see, at least at this point in time, that being a real good fit.”

“Well, that’s the thing. Again, the numbers are the numbers, right. It’s not even about, could he help. We can’t even get into the real discussion. Like, should they even do this? Which I think there is probably an interesting discussion there and it would be hard to conclude, no, given how good Patrick Kane remains.

I think how kind of cool it would be to see those guys together but just can’t get past the… Basically, we can’t even get in the front door of this discussion because I just don’t see how it makes sense with the summer the Leafs have had. Where they’ve allocated their cap dollars. I just don’t believe they could even have much of a conversation about that.

Garcia Moves Into The US Open Fourth Round

The Philadelphia 76ers enter the 2022-23 season with an almost identical roster as the prior year. There...