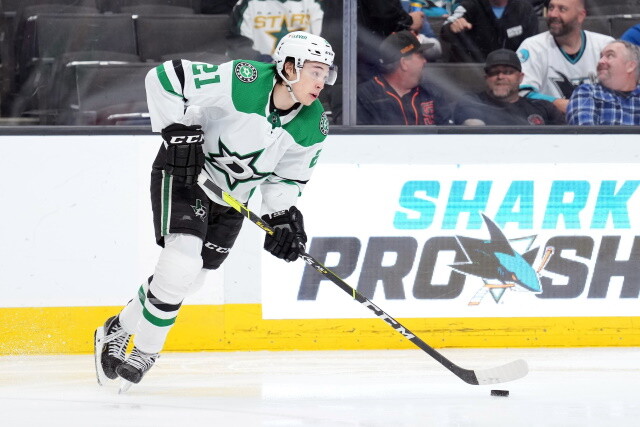 Big bucks for advertising on the Canadiens jersey

Shawn Simpson: A marketing executive that spoke with said that he thinks the Montreal Canadiens are getting $5 million a year for having the RBC patch on their jerseys. That would be one of the highest in the league.

Stars hope to have Jason Robertson at training camp

“History has shown any time players miss camp, it usually stagnates their training camp a little bit and their start to the season,” Nill said Tuesday morning during a phone interview. “Our goal is to get him here for training camp, yes.”

Nill said they are in “constant communication” with Robertson’s agents and are “working through different avenues of the contract.”

The Stars have about $7.2 million in cap space. A three or four-year deal would come in around $7 million, and a seven or eight-year deal may take around $9 million a season.

Vincent Z. Mercogliano of Lohud: Last season after his demotion to the AHL, Nils Lundkvist’s agent expressed interest in a trade to management according to multiple sources. The 22-year-old right-handed defenseman is blocked behind Adam Fox, Jacob Trouba and Braden Schneider, so it does make some sense from his standpoint.

If the Rangers were to move him, it would leave them a little thin on the right side depth chart. Andy Welinski and Hunter Skinner appear to be next in line on the depth chart after Lundkvist.

Rangers GM Chris Drury doesn’t appear to be one who moves a player if he doesn’t find what he thinks is fair value. It’s believed that Drury is looking for a cheap, young center in return for Lundkvist.

Do England Know What Their Best T20 XI Actually Is?

The League Likes Extensions, the Braves Love Them