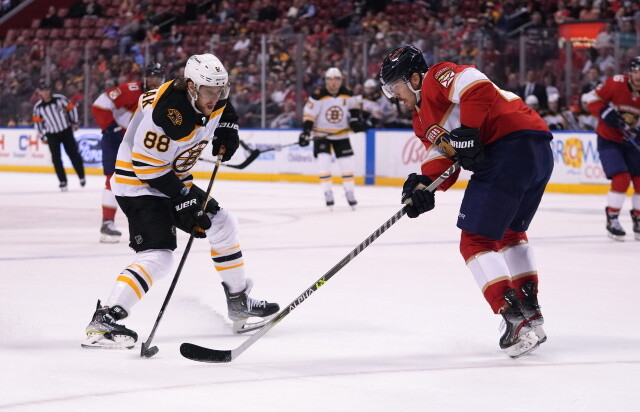 Sportsnet: Elliotte Friedman and Jeff Marek on the 32 Thoughts Podcast on some players who are entering the final year of their contracts. Some players are okay with holding contract talks in-season, while others don’t want to talk or think about their contract situation. Marek asks Friedman if MacKenzie Weegar, Bo Horvat and David Pastrnak are okay with talking in-season or if they don’t want to talk during the season.

On Weeger: “From what I understand right now, I believe Weegar’s goal is to say, ‘we have this done by the start of the season or we stop talking.’ I think there’s, even he said it at the beginning of training camp that there was reason to believe it was worked out, and do think the two sides are taking a run at it. But from what I’ve heard, his preference is, once the puck drops, shelve it.

I also wonder about Darryl Sutter too. Wouldn’t be surprised if he gets an extension too.”

On Horvat: “Yeah, this one I’ve heard mixed things. I really thought at the beginning of the summer, and I think he did too, that this one was going to get worked out. In the summer we talked about it a little bit.

Look. I’ve said this several times, I’m not listening to any of the rhetoric here. I’m really not. There was a ton of rhetoric on J.T. Miller. It got done, and it got done in days. So to me, this is all noise.

Vancouver has shown if they want to get it done, it’s getting done. I’ve heard mixed things. I’ve heard he won’t talk once the puck drops but I’ve heard it’s not completely set in stone. So, I’m not committing to this one yet. I still want to believe this one’s going to get done but I think there is a lot of uncertainty in terms of where this is going.

On David Pastrnak: “Yeah, that’s a big one and I obviously think it’s a huge extension for a lot of reasons. One of the things I heard about Pastrnak is that he’s not afraid to continue discussions into the season. I don’t believe there is a hard deadline here.

I think Pastrnak, from everything I’ve seen about this guy, and heard and read about this guy, he has a real healthy balance about his life and his competitive nature, and where he is. I don’t think he’s the kind of guy who can be bothered by it too much. So I’ve heard he won’t be afraid of letting the conversations go into the season.

But from what I understand about Pastrnak, he’s not necessarily going to be afraid of having his agent handle discussions during the year.”

“The Badminton Experience” med Jan Ø. Efternavn unødvendig – there can be only one! – BadmintonBladet