NHL Rumors: J.T Miller talks about the trade rumors and his contract situation 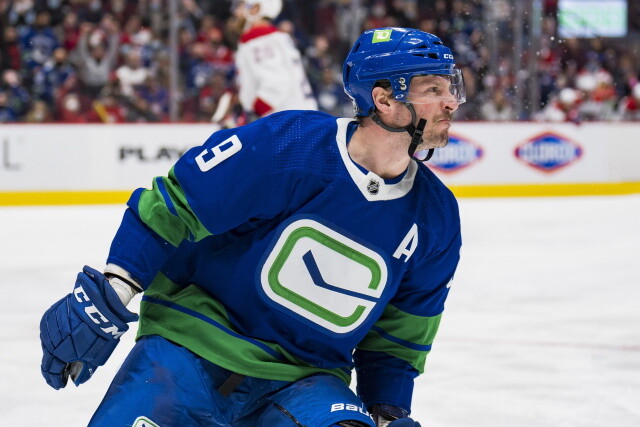 Miller when asked why he doesn’t have a contact extension in place for $10 million a season by now after a 99 point season and why is his name in the trade rumors.

“Well, as you know I can’t indulge everything here but it’s a new fit for our management. It’s new for us. They were there for three months. They don’t know. There’s a lot going on and they have a lot of decisions to make on a lot of players.

But, that being said, if it’s not meant to be, I understand that too. And I’d like to, trust me, I’d like to have a deal done in Vancouver and I want to be there but at the same time, I have to respect everybody’s vision. If that doesn’t line up, it kind of is what it is.”

Scott asking that during his exit interviews, what did they all say? We’re going to negotiate all summer? All the rumors and speculation.

“We do a lot of talking about the season and why we aren’t in the playoffs. The future, and basically, we definitely were under the impression that we were going to negotiate a little bit for an extension this summer. And like I said, we did that pretty early on and like I said, it just didn’t really go the way, I don’t know for everybody, but obviously not for me. Like we didn’t really find happy ground there.

So,   there’s just a lot going on. Like I think, with Patrik and Jim, they haven’t been here long. They have some hard decisions to make and then they had the draft right away, and then free agentcy, it’s been kind of a crazy thing.

And everything on the internet, the media drove themselves crazy all summer. I mean, there was nothing real on the internet all summer. There was, every time a team pops up, everytime somebody says something, 99 percent of that is not real. It’s a rumor mill, and when you play in Vancouver, it’s non-stop. I was traded to the Penguins 20 times this summer. I don’t know if you’ve heard about that.

So, it’s a lot of B.S. going on with the internet and all that. It’s mainly the reason I don’t have any of it. So, it is what it is. There’s a lot of, to your point, there’s a lot of, a handle of teams where I’d probably be a good fit, so somebody posts something and then it just catches like wildfire.

I want to be in Vancouver. It’s all I can tell you, I hope it works out but at the same time, it’s a business from my side and their side and I think they understand that. I certainly understand that too.”

When asked if it’s frustrating or distracting that offseason entering the final year of his contract, with Jim Rutherford saying ‘I we can’t sign him, we’ll do the best to put him in a place where he’s going to go but it won’t be here in Vancouver.’ It’s a vote of confidence, it’s planning for the future without their best player – J.T. Miller. Is it hard to focus and hear?

“It’s been a lot. I’m not going to lie. But I understand you kind of want to this to happen I guess. You either have this… I try to take the good with the bad. These are good problems. It’s how I’m looking at it. It’s definitely going to be next to impossible to not be a 100 percent focused on the task when you have your livelihood and career on the line. It’s gonna seem like a nightly basis, especially in Vancouver if I don’t score the first game of the year, they’re gonna want to light my jersey on fire, you know what I mean.

It is what it is. It really is. I got to respect their vision. I can’t speak on behalf of what that may be. I’m just there to help my team win and get into the playoffs. And if a day comes along where they say, ‘hey, you’re not part of this team anymore,’ I’ll live with that and I can move on. But until that happens, I have a goal and that’s trying to be one of the best players every night on that team and just trying to keep going what we’ve been building the last couple of years. Like I said, when I got there, expectations were high and they shifted a bit with the crazy world, what’s going on around us and now I think we understand what were capable of and I think we need to keep that momentum. If we do keep that momentum going into the season next year, I think we’re going to be a playoff team.”