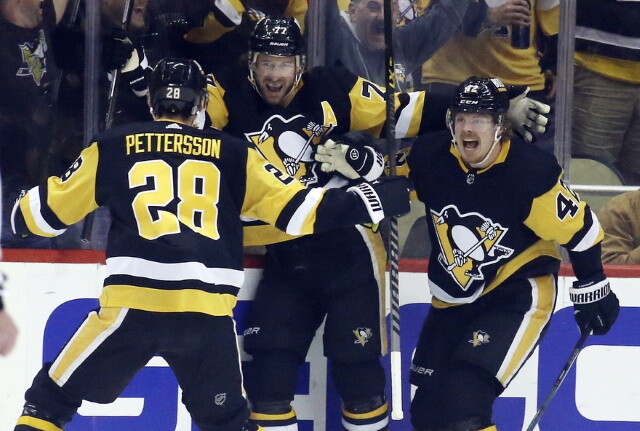 Bob Stauffer: Edmonton Oilers GM Ken Holland said on the “Oilers Now” radio show that he expects restricted free agent Ryan McLeod to be at training camp on either a one- or two-year deal.

A Bo Horvat extension by the start of the season? On the J.T. Miller trade return

Taj: Satiar Shah on Sportsnet 650 on Vancouver Canucks Bo Horvat: “Everything I hear on Bo is it’s still on track to get done…sense is Bo will be signed before the NHL season begins.”

Taj: Satiar Shah on Sportsnet 650 on the J.T. Miller trade return: “They can probably still get what they were offered at the deadline as the season goes on but they prefer to get one really good (premium) player back.”

Dan Kingerski of Pittsburgh Hockey Now: It’s possible for the Pittsburgh Penguins to become cap compliant to start the season by sending Ty Smith and Drew O’Connor to the AHL and putting someone on waivers.

Waiver options could be Mark Friedman, Chad Ruhwedel and P.O. Joseph. Friedman and Joseph would be tough losses for the Penguins.

Dan Kingerski of Pittsburgh Hockey Now: There are 13 teams that are over the salary cap and many others with little room.

There are four teams that have salary cap space:

Buffalo Sabres – Could use some experience on the left side defense.

Arizona Coyotes – Don’t need help on the left side but could use help up front, so Blueger or Kapanen could be candidates.

Anaheim Ducks – Could use some help on the blue line and up front.

Chicago Blackhawks – Will be looking for high draft picks and prospects. May eventually need to take on salary if they move Patrick Kane and Jonathan Toews at some point.