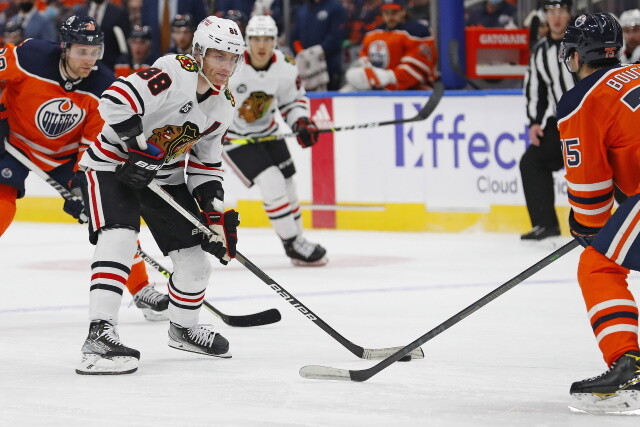 Would this Patrick Kane trade ‘offer’ work for the Oilers and Blackhawks?

Matt Porter of the Boston Globe: Chicago Blackhawks forward Patrick Kane has been linked to the Edmonton Oilers.

Would a first-round pick, a prospect, Kailer Yamamoto and Tyson Barrie be enough to acquire Kane?

Fallback options for the Oilers could be free agents Phil Kessel and P.K. Subban.

Islanders GM Lamoriello on the trade and free agent market, as well as Zdeno Chara and Andy Greene

Greg Wyshynski: New York Islanders GM Lou Lamoriello said that they explored “many different options” in the free agent market but added that the cost to upgrade at one position meant they would have to downgrade in another position.

Joe Pantorno: To make “hockey trades,” Lamoriello said that they would have had to give up to much. Lamoriello added:

“I’m really excited about the team we have going into the season right now. I feel very good. If we could’ve gotten better, we would’ve done that.”

Ethan Sears: Lamoriello: “There’s no disappointment where we’re at because we feel very good about where we are or we would have made drastic changes last year if we didn’t feel good about the group we have and what we’re capable of doing. I say that with comfortability. I say that with confidence. I’m looking forward to getting back at it and maybe proving everybody wrong.”

Andrew Gross: Lamoriello said that he hasn’t had any talks with UFA defensemen Zdeno Chara and Andy Greene and they are not being considered for the Islanders next season.

Stefen Rosen: Lamoriello on Brian Wiseman leaving to be an assistant coach with the San Jose Sharks: “We thought that things would work out and then different sets of circumstances, it did not work out. I’m delighted that he’s in San Jose. Quality hockey person.”

It looked like overtime was in the future. But then rookie punt returner Marcus Jones sent everyone...