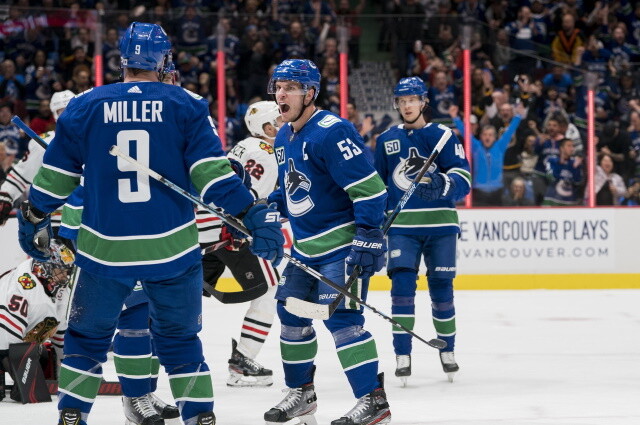 Ben Pope: Chicago Blackhawks GM Kyle Davidson said yesterday that neither Jonathan Toews nor Patrick Kane have approached him about a trade request.

Davidson has seen the rumors out there but reports that there’s “nothing new.”

He added that all sides are “excited to get to training camp and see how the season plays out.”

Rob Simpson of Vancouver Hockey Now: There were reports last week that J.T. Miller could cut off contract extension talks with the Vancouver Canucks once the regular season starts.

Miller’s agent Brian Barlett when asked if this was the case.

“It’s possible we make a decision to cut off talks when the season starts, to avoid distractions for JT and his teammates, but we have not made that decision yet.”

Would this force the Canucks hand to get a deal done soon or would they just wait to see where they sit at the trade deadline?

There is the risk of injury or Miller struggling and decreasing his value. On the other hand, there could be a bidding war at the deadline.

It was reported at the draft that the New York Islanders were interested and after talking to some GMS, there are at least two Metropolitan Divisions teams that are still interested in Miller.

Can James Reimer increase his trade value or could the Sharks re-sign him?

Corey Masisak of The Athletic: San Jose Sharks goaltender James Reimer is entering the final year of his contract. If the Sharks are out of the playoff race, will they look to move the veteran at the trade deadline?

If Reimer posts a .910+ save percentage, his trade value could increase, and there will be at least one team looking for a goalie by the deadline.

It’s also possible the Sharks and Reimer look at a short-term extension. If Reimer is moved and Kaapo Kahkonen doesn’t look like a starter, the Sharks could be looking for a goaltender next offseason.

Which companies actually R&D and produce their own racquets?

Featured in ITTF Magazine: Life Not Life Without Regret