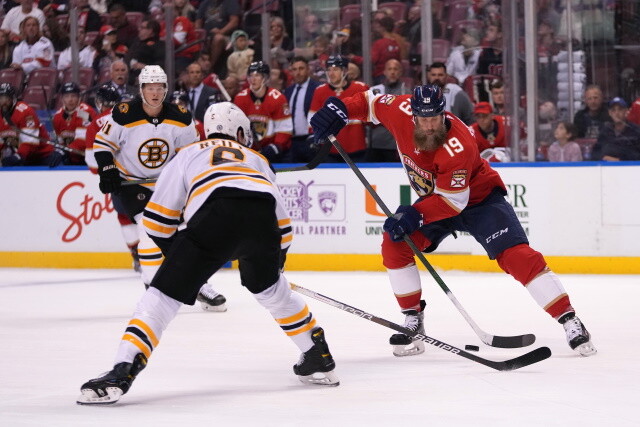 Could the Flames be interested in Evan Rodrigues or Joe Thornton?

Steve Macfarlane of Calgary Hockey Now: Rumors have Evan Rodrigues as one of the free agents forwards the Calgary Flames could be looking at as the offseason winds down.

Steve Macfarlane of Calgary Hockey Now: Joe Thornton might be the perfect addition for the Calgary Flames on a PTO. Would Thornton want to sign a PTO with anyone?

The Flames have 10 defensemen on one-way contracts and could move one for a forward.

Could Bode Wilde be on the move?

Stefen Rosner of NYI Hockey Now: Because Bode Wilde wouldn’t get vaccinated last season, New York Islanders GM Lou Lamoriello wouldn’t allow him to play with the team, and he ended up playing in Sweden.

NHL protocols have changed this season, but that may not be enough for the Islanders.

Wilde’s agent Allain Roy wouldn’t comment on whether he would be attending the Islanders training cap later this month.

He’s down the Islanders’ depth chart on the right side and a fresh start elsewhere may be needed. He may not have much trade value, and Lamoriello isn’t one to give a player away for free.

Wilde has a year left on his entry-level contract.

Mike Reilly may eventually get moved

Jimmy Murphy of Boston Hockey Now: Boston Bruins defenseman Mike Reilly has two years left on his contract at $3 million a season. After a down season last year, Reilly is looking to rebound.

The Bruins will start the season without Charlie McAvoy and Matt Grzelcyk on the blue line. Teams have called the Bruins about Reilly according to sources, but while McAvoy and Grzelcyk are out, the Bruins would just be listening.

Now, when McAvoy and Grzelcyk return, as well as Brad Marchand, the Bruins may need to move out some salary when they no longer have LTIR relief. It wouldn’t be a surprise if Reilly is the odd man out at that point.

What are the Parts of a Golf Club?

How To Acquire Players After The Trade Deadline