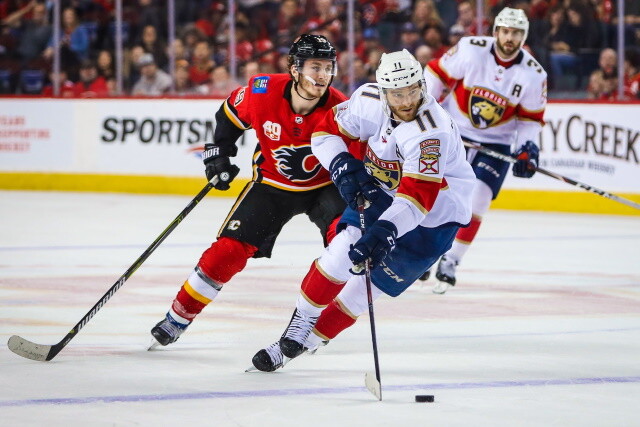 With free agency likely done and the vast wilderness of August almost gone too, why not take a look at some moves that get a thumbs up and some that do not. It is hard to believe but in a month or so, pre-season games will be played.

Over the next couple weekends, at NHL Rumors, we will take a quick look at some of the summer moves that we liked and some we are less enamored on. Again, these are fast impressions and do not shoot the messenger.

Let’s start off with a few fireworks.

Consider that the Calgary Flames were put in a difficult position. Johnny Gaudreau left for free agency to Columbus and Matthew Tkachuk wanted to leave. Brad Treliving was up against it. So, naturally, he made the trade of the summer.

Calgary signed then traded Tkachuk to the Florida Panthers. The Flames received Jonathan Huberdeau and MacKenzie Weegar in return as far as NHL players. Huberdeau already has agreed to an eight-year contract extension. Weegar’s may be in the works.

Given what happened, Treliving apparently was not done as he inked Nazem Kadri to a seven year deal worth $7 million AAV on Friday. Kadri gives the Flames a grit and scoring ability with some versatility. This is the polarizing move that is likable short-term but not in the long-term.

That matters little. Calgary is in win-now mode and with about $2 million in cap space has a bit of flexibility. They were busy and yes the rest of the teams are much faster.

Again, this will be one that causes a minor stir. However, letting Sonny Milano walk was a curious move by the Anaheim Ducks. Milano was a nice pairing with Trevor Zegras as he came into his own his rookie season. The Long Island native is someone who can fit in almost anywhere and will not be expensive.

The Edmonton Oilers signed Jack Campbell to a five-year deal worth $5 million AAV. He struggled mightily over the second half with the Toronto Maple Leafs as Toronto was eliminated in the first round again.

Campbell can be good in net for Edmonton but things can go south quickly. That is the concern. The Oilers needed more stability of maybe a Sergei Varlamov perhaps. However, Ken Holland rolled the dice. File this under don’t like.

Rob Blake and the Los Angeles Kings shot their shot with Kevin Fiala. Fiala shook off some inconsistency to produce a 30-goal season and 85 points in 82 games. The Kings dealt for his rights then signed him to a seven year deal worth $7,875 million AAV.

Simply, it is a move the Kings needed to make. They boost their scoring, overall speed, and make their power play more of a threat. For an up and coming team, they may be close to here.

The thing with San Jose is that they are on a long-term rebuilding journey whether anyone wants to admit it or not. Naming Mike Grier as general manager was probably the one likable move they made that merits reporting. Grier has quite a task ahead of him and unloading Brent Burns to Carolina was just the beginning.

Ron Francis did good things? What year is this? There is one move that sticks out and it is thanks to Columbus signing Johnny Gaudreau to that $9.5 million AAV long-term contract. The Seattle General Manger was able to acquire Oliver Bjorkstrand from the Blue Jackets.

Bjorkstrand is a top-six scorer who could top 30 goals a season in Seattle. He had 28 last year in a popgun offense with Columbus. Giving up two mid-round 2023 picks for the winger was a small cost. His contract is team friendly and gives four years of control. Enough said.

Ilya Mikheyev was a solid move for Vancouver. Paying him $4.75 million for the next four seasons is a bit of a risk but Vancouver took that plunge. He did score 21 goals and 32 points in 53 games for Toronto last year.

If he stays healthy, the Canucks have quite the forward at a reasonable salary. If not, it becomes an albatross. Vancouver has enough problems. This should not be one.

Now, the Vegas Golden Knights are quite the train wreck. With moves galore and all sorts of misfortune from last year, Vegas tried to right the ship this summer. For as good as the move to bring Bruce Cassidy aboard as coach is, shipping Max Pacioretty to Carolina was bizarre.

Yet, the weirdest thing happened here. Pacioretty will likely miss a significant portion of the season due to an Achilles tear. It will likely cost him the ability to be 100% until 2023-24.

File this under Cassidy we like and Pacioretty, let us sleep on it.

Breaking down the roster, looking ahead to Worlds with USA's John Speraw

Discussions about whether to let the beer and wine flow at Pinnacle Bank Arena during Husker men's...