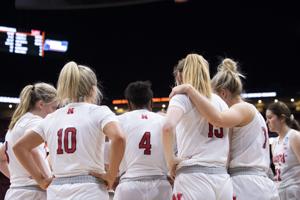 The Nebraska women’s basketball team will open the 2022-23 season against Omaha on Nov. 7 at Pinnacle Bank Arena.

The Huskers and Mavericks will tip off after Nebraska Life Skills Sportsmanship Pep Rally at Pinnacle Bank Arena.

The Huskers also announced the home portion of their nonconference schedule on Thursday, including an Oct. 30 exhibition against Washburn:

NU also has its ACC/Big Ten Challenge game at Virginia Tech, and an annual yet-to-be-scheduled rivalry game at Creighton.

MLU: Nick Gonzales’ Bat Has to Heat Up

National Inclusion Week: Sirona Care and Health partnership shows how badminton is for all

Book Review: If Gold Is Our Destiny by Sean Murray

Mike Harrington: Buffalo Sabres goaltender Eric Comrie had an MRI on his knee and he’ll be...