Medvedev defeats Norrie 7-5, 6-0 in Los Cabos for first title of the season

Daniil Medvedev, world #1 and reigning US Open champion had not won a title since claiming his first grand slam in New York last September. He started the current season down under where he reached the final. Up two sets on Rafa Nadal, it appeared a foregone conclusion that he would secure his second and consecutive slam at the Australian Open.

The resilient and relentless Spaniard took the Russian to five and prevailed after nearly 5 ½ hours to win his twenty-first grand slam title and second down under. That crushing defeat- his second to Nadal in a slam final- certainly left an open wound but would pale in comparison to the pain inflicted by Russia’s invasion of Ukraine a month later.

The twenty-six-year-old was permitted to compete on the ATP tour under a neutral flag but was barred from playing any grass court events in England, including Wimbledon. Medvedev was a finalist in s’Hertogenbosch and Halle during the month of June and was competing for the first time since then at the Los Cabos Open, an ATP 250 hardcourt event. 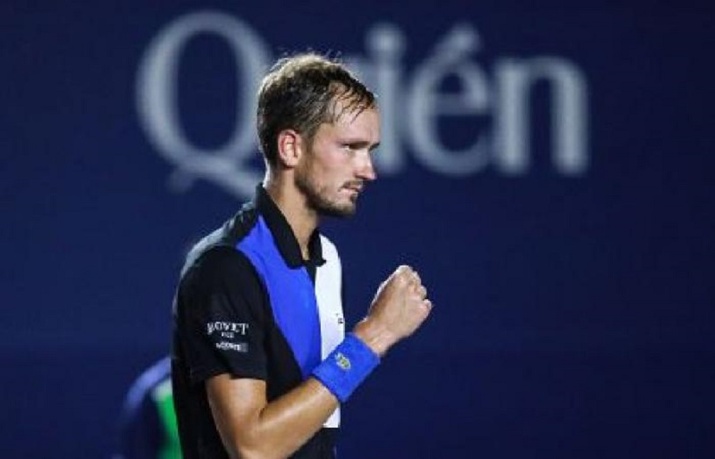 Cam Norrie the defending champion, broke into the top ten this past April but is currently ranked #12. In hot, humid conditions, the soon-to-be twenty-seven-year-old lefty from Great Briton served first and held to 30 for 1-0. Medvedev opened with a well-placed serve and an inside-out forehand winner, holding to 30 for 1-1.

Norrie missed 3/6 first serves including a double fault yet held for 2-1 with a fantastic inside-out forehand while Medvedev with both feet in the air, ripped a backhand down the line in along with two aces for 2-2.

Norrie faced double break point in the fifth game as the errors began to accrue and dumped serve when he mishit a crosscourt backhand while Medvedev gave back the break with a double fault.

Level at five apiece, the Brit donated three unforced errors to drop serve while Medvedev struck two blistering backhands on consecutive points to close out the set at love.

Norrie served first in the second and struggled as his opponent continued to dictate off the ground and with a crisp backhand volley, converted break point. Medvedev hit the ball with conviction and precision to consolidate the break at love for 2-0. Norrie no longer dialed-in, dumped serve for 0-3 with another errant forehand while Medvedev held easily to 15 for a commanding 4-0 lead.

Norrie opened the fifth with a double fault and dropped serve when he overcooked a backhand and soon thereafter, Daniil Medvedev was in the winner’s circle for the first time in eleven months.

While there were a few erratic moments, Medvedev seized and maintained control of the match. He hit five aces to one double fault, converted 6/10 break points, and won 67% of first and 69% of second serve points. He was also quite effective when receiving, winning 58% of first serve and 57% of second serve return points. The world #1 should be pleased with his performance heading into the National Bank Open in Montreal where he is the defending champion.

Should i change my shoes for the shin splints?

No. 9 Virginia Tech guard records triple-double in rout of Nebraska

The badminton serve: It’s a move that can help you kick off your rallies with a head...