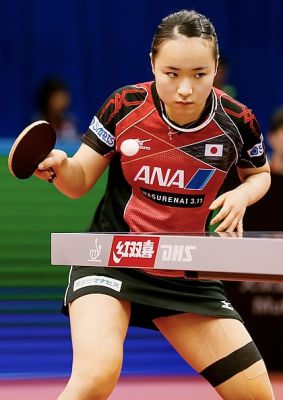 Ito Mima (伊藤 美 誠 Itō Mima (born October 21, 2000) is a Japanese table tennis player. She won the bronze medal in the women’s team event at the 2016 Summer Olympics when she was 15 years old and became the youngest Olympic medalist in table tennis in history. At the 2020 Summer Olympics, she won a gold medal with her partner Jun Mizutani in her mixed doubles debut, a bronze medal in the women’s singles, and a silver medal in the women’s team event. The highest position in the ITTF world ranking is 2nd (2020, 4 months).Often referred to as the “biggest threat” to Chinese table tennis dominance, Ito Mima has the highest winning percentage against Chinese players in women’s table tennis history. She has a winning record against several top Chinese players, including world champion Liu Shiwen, former world No. 1 Zhu Yuling and junior world champion Qian Tianyi. Her signature playing style includes deadly shovel serves, fast backhands with short spikes, and flat forehands.Miu Hirano (born in Numazu City) of the same school year is her friend and rival, and since childhood they have paired under the nickname “Miumima”. In 2014, Ito Mima became the youngest player to win a stage of the ITTF World Tour and World Tour Grand Final, and won the World Championship medal paired with “Mimahina” with Hina Hayata of the same class. All three were born around the year 2000 and are also known as the “Golden Generation of Women’s Table Tennis in Japan”.