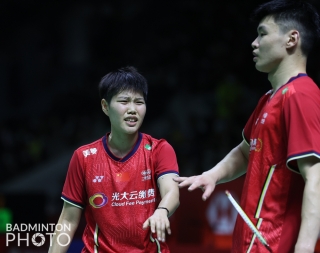 The match which took place at Istora Senayan, Jakarta on Friday was tight from the start.  Unable to adapt to court conditions and some miscommunication with each other, Seo/Chae were forced to fall behind, dropping the first game 21-19.  After getting into the rhythm, the fifth-seeded pair accelerated and played well until they were able to win the match with a final score of 21-19, 21-10, 21-14.

Chae Yu Jung (pictured below) admitted that she felt happy with this victory, because recently she just returned to international competition after suffering a severe injury.  Chae also said that she did not set targets too far in this tournament, due to the injury. 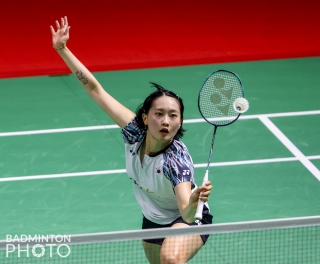 “I am very happy to win this match because I’m still injured and haven’t competed in a long time.  That’s why my target was actually only until today (quarter-finals) but it turns out that we won and will go further, to the semi-finals,”  Chae said after the match.

“I still have not fully recovered from my injury and am currently still undergoing continuous treatment.  This has been one of the worst periods of my life.  I was so sad because the injury is quite severe, but fortunately there are other Korean female athletes who can fill the void while I am injured.

“Even though I’m still injured, I will keep fighting until I retire later,” she added.

This victory become the first ever victory for this world #6 pair over the Chinese.  The Koreans lost each of the previous 4 meetings before. 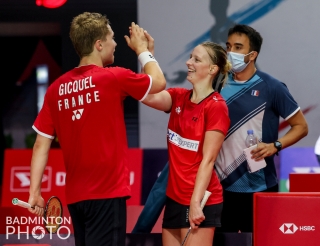 In fact, including their other pairings, both Seo and Chae have lost 6 straight times to Wang and Huang.  The last time either player beat this Chinese pairing was the day that Chae really put herself on the map, at the 2012 Asian Junior Championships almost 10 years ago.  On Saturday, the Koreans will have even more history to overcome as they seek their first ever win against two-time World Champions Zheng Siwei / Huang Yaqiong.

Another surprise came from the French pair, Thom Gicquel / Delphine Delrue (pictured right), who managed to win easily over the Tokyo Olympic semi-finalists, Tang Chun Man / Tse Ying Suet.  The world #11 pair from Europe managed to secure a place in the semi-finals after winning 21-15, 21-10 in 42 minutes. 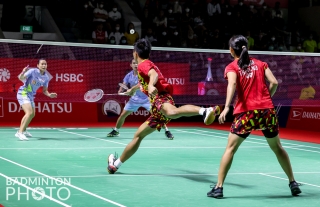 The fast and tactical game applied by Gicquel/Delrue didn’t give the Hong Kong pair a chance to develop their game.  The slick attack and defense were also shown by this pair of silver European Championship medallists right from the beginning of the match.

Speaking after the match, the two French players expressed their happiness with today’s victory.

“We played all the good choices in the game and that’s why we won today.  We tried to be consistent and not give them a chance for points,” Delrue said.

This semi-final is the second time for them after previously reaching the semi-finals at the Indonesia Masters in 2019.  3 years ago, they defeated the host pair, Praveen Jordan / Melati Daeva Oktavianti. 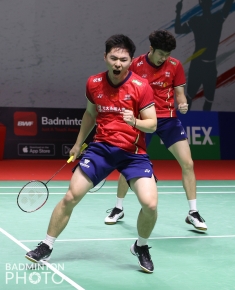 “We played really well here in Istora.  We really like to be here, playing with this enormous atmosphere.  Maybe, because we enjoy it a lot so we were able to win and reach the semi-final here,” said Gicquel.

In the semi-finals which will be held on Saturday, Gicquel/Delrue will face the Thai pair, Supak Jomkoh / Supissara Paewsampran (pictured above), who took out the last Indonesian representatives, Spain Masters winners Rinov Rivaldy / Pitha Haningtyas Mentari.

Indonesian fans can still hope for an all-Indonesian men’s doubles final as both the gold and silver medallists from the 2018 Asian Games are still in the running.  Seo Seung Jae, meanwhile, had his hopes dashed for a second appearance on semi-finals day.  In the last and closest match of the day, Seo and Kang Min Hyuk clawed back to stay in their quarter-final by winning the second game 28-26 but China’s He Jiting and Zhou Haodong (pictured right) clinched the decider.

He and Zhou advance to the semis to take on Fajar Alfian / Muhammad Rian Ardianto (pictured bottom), who beat Olympic champions Wang/Lee. 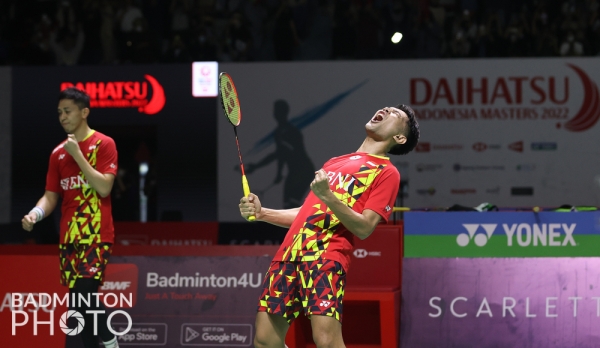 Coaching Tips of the Week: Don't Be a Predictable Receiver

When Your Ball is Under the Lip of a Bunker