Have you ever played your golf course backwards? We tried it

A once-a-year competition allows members at York to play their course in reverse, so Steve Carroll gave it a whirl

I topped my opening drive just short of a bunker, laid up a 6 into heavy rough, and hooded a sawn-off 8-iron – swing-restricted and through a copse of trees – into the middle of the green. It would have been quite the birdie.

What is it they taunt, never up, never in? Alas, it was only a par. But quite the adventure, and the first of 13 holes in an annual competition at York Golf Club – the extraordinary llasnertS competition.

Those of you who enjoy wordplay will note that’s backwards for Strensall, the village in the suburbs of the Yorkshire city where the club have played a heathland course designed by five-time Open champion JH Taylor since 1904.

York will host qualifying for the R&A Girls’ Amateur Championship next year and the tree-lined layout, a popular venue for many county and union events, will pose some serious questions for tomorrow’s top talents.

It also happens to be where I play my golf and I recently had the chance to tee it up in a way not even the heralded figure of the Great Triumvirate had in mind.

For once-a-year, in just one competition, the course is played in reverse – and it’s a thoroughly enjoyable and mind-twisting experience.

The landing areas you’re accustomed to focusing on disappear, holes narrow claustrophobically towards tees and, for the more adventurous players, you’ve got to be able to hit the ball very high.

Playing a course backwards is not unique. The Old Course at St Andrews was originally designed to be attacked both ways and the clockwise routing was once the default before Old Tom Morris got to work.

While the occasionally strange bunkering on golf’s most hallowed ground starts to make more sense when it’s flipped, playing a more conventional course back to front poses quite a few more challenges. 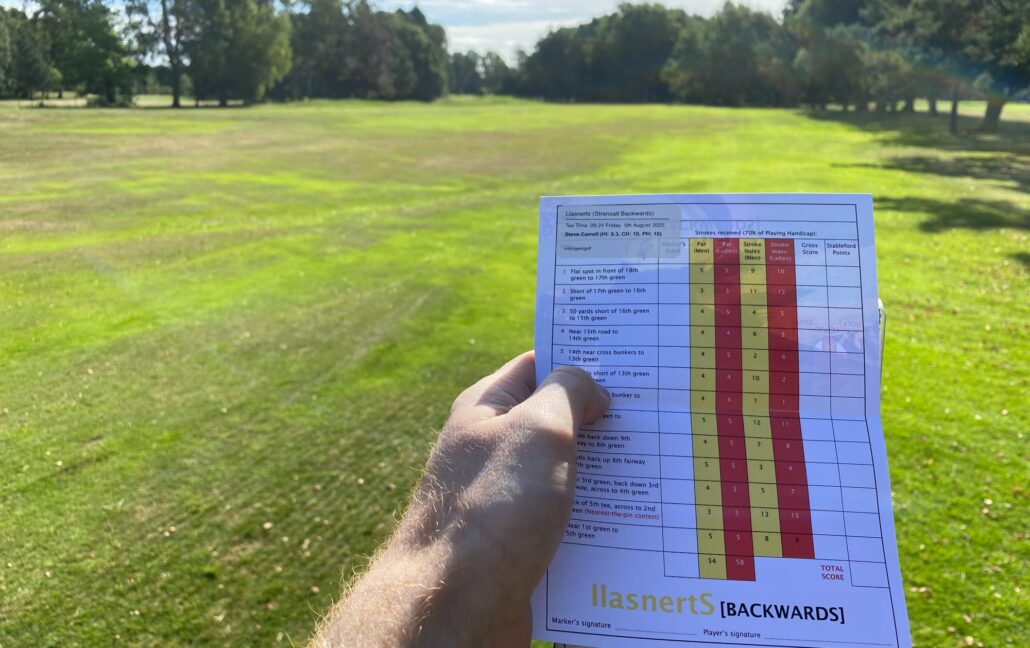 The scorecard issued for the occasion outlined a par of 54 for men, 58 for ladies, and we received 70 per cent of our playing handicaps. There were four par-5s – eight for ladies – seven par-4s and two par-3s.

GPS was utterly useless and without a laser, and the patience to find a gap through the trees, yardages would have been a complete mystery.

It became a test of courage. How adventurous do you want to be? For the safety conscious, there was a preferred playing line – often using opposite fairways to edge your way towards the hole.

A par score, though, wasn’t going to cut it. To post some good numbers you had to take on quite a bit of risk and try and clear some of the foliage that often hid a green from a fairway.

My results were… mixed. The highlight came on the 9th – hitting a high iron just over the trees to about 15 feet. (Of course I missed the eagle putt.)

The low came one hole later as I totally misjudged a short approach and dunked it straight in the pond that guards the 7th green. Now I can say that water has claimed my ball from both directions.

My favourite hole was the par-3, penultimate, 12th – a 100-yard punt from the back of the 5th tee to the 2nd green that I’m going to campaign to become part of the actual layout. And I barely even made the putting surface!

In between it was a Clint Eastwood western. A par-par start, a double bogey zero-point finish, and a lot of hunting around trees in between. Truly the good, the bad, and the ugly – all resulting in a measly total of 24 points at 2-over par.

But it was an incredible amount of fun and gave me some new insight about some of the angles to hit when I play the course the conventional way.

I’ve often read that you should look back at a hole from the green and now I understand exactly what they mean.

The winning score was 34 points, which is some achievement on a 13-hole course, and I can’t wait to start walking backwards again next year.

Have you played your course in an unusual way? Get in touch, drop me a tweet.

FIFA just realized they messed up the World Cup schedule