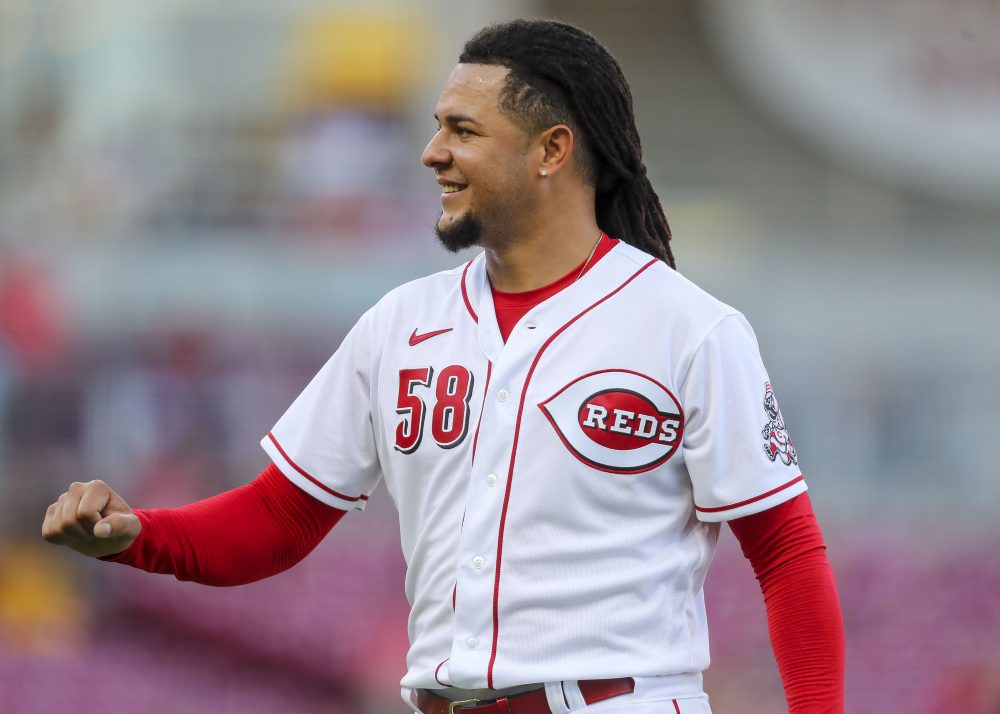 Welcome back to the FAAB Review, the column that reviews the goings-on in multiple analyst leagues in the hopes we can help you with your own FAAB bidding process and habits. This column will mostly focus on The Great Fantasy Baseball Invitational (TGFBI), a contest that contains 31 leagues of 15 teams each and crowns an overall champion at season’s end. We’ll look at the 10 most popular FAAB buys in those leagues every week. We’ll also focus on some highlights in Tout Wars AL and LABR NL, two deep industry leagues.

Luis Garcia $30 (Maximum Winning Bid $99, Minimum Winning Bid $1)
As Ferris Bueller once said, life moves pretty fast. On Friday, Padres manager Bud Black indicated that Taylor Rogers “will pitch earlier than the ninth for the time being.” Yesterday, Garcia dominated the Twins in a three up, three down save on 12 pitches with one strikeout. Garcia’s numbers to date haven’t been dominant but he throws an upper 90s sinker that’s difficult to square up and while he isn’t a big strikeout pitcher, he isn’t Mark Melancon in the category either. It’s a committee for now but if there is a reliever who runs with the gig in San Diego over the next two months it will be Garcia.

Jeimer Candelario $22 ($53, $1)
A week ago Candelario was an afterthought, a struggling hitter on a bad Tigers team with a .194/.262/.321 slash line. A hot streak to start the week changed perceptions and Candelario is suddenly a popular add in deeper leagues. This is one of those situations where he truly wasn’t that bad, but the hot streak isn’t portending a ridiculous run where the Candy Man goes on a tear and hits 13-15 home runs to close out 2022. What’s more likely is Candelario finishes with a home run total similar to last year with a lower batting average. Third base is a thin position so he’s useful, but don’t expect miracles.

JJ Bleday $20 ($71, $3)
Bleday is a repeater from last week’s column at almost the same average cost ($19 last week). He looked decent against the Pirates and Reds but perhaps predictably looked somewhat overmatched against the Mets’ superior pitching staff. The strikeouts are always going to be rough, so the key is going to be getting his walk rate up and delivering a passable on-base percentage. The power is legitimate if he can make enough contact.

Domingo Germán $19 ($58, $1)
German was featured two weeks ago in this space, when it was announced he was about to take over for an injured Luis Severino in the Yankees rotation. He has had two starts, with extremely poor results against the Astros and OK ones in his most recent tilt at Citi Field. He gets two starts this week (home tonight against Seattle and at the Cardinals on Sunday) and is a borderline option in 15-team mixed. German is the sort of pitcher I’d use if wins and strikeouts are a priority and avoid if I’m being mindful of my ratios.

Pete Fairbanks $18 ($51, $1)
There was a great deal of reliever speculation this week, but Fairbanks is the only reliever among this week’s FAAB acquisitions who picked up two saves over the last seven days. We know: Trusting the Rays to keep one reliever in a set role is a dubious proposition, but Fairbanks has elite stuff when he’s healthy and even his control has been excellent in a very limited sample size in 2022. At this price, he’s perfectly fine to stash him to see if he can pick up most of the Rays saves down the stretch.

Jake McCarthy $15 ($32, $1)
The biggest beneficiary of the David Peralta trade in Arizona will be McCarthy, who is penciled in as the Diamondbacks new starting leftfielder. He’s sort of old for a prospect (25) but reworked his swing during the minor league shutdown in 2020 and returned with more power thanks to an added leg kick. He destroyed pitching at hitter-friendly Triple-A Reno and has been more average than great in the majors so far, but the opportunity combined with the power/speed potential make McCarthy a fine speculative addition.

Jonathan Hernández $14 ($41, $1)
I didn’t think Brett Martin would be long for the closer’s role in Texas but didn’t think he’d come and go this quickly. The Rangers had Hernández warming up Saturday, but manager Chris Woodward told reporters he was saving him for the ninth inning. If this was a subtle hint that roles for the Rangers had changed then Hernandez’s three up, three down save yesterday was a giant blinking neon sign. Hernández uses an effective sinker/slider combo and can dial it up to triple digits with the sinker. That’ll play if he can command both pitches. He is risky because of his command and health, but the cheap acquisition cost means you have very little to lose (I got him for $5 in TGFBI and $20 in Tout Mixed Draft).

Félix Bautista $12 ($24, $1)
Yet more reliever speculation, this time centered around the idea that the Orioles might trade current closer Jorge López. I dig this acquisition even if López isn’t traded, but if you’re taking Bautista because you need saves you might have a bad time. Bautista has been one of the best relievers in the game this season and should continue to be an elite option regardless of his role. In deep leagues, relievers like this should be rostered more frequently, particularly as we head into the homestretch and teams start limiting innings for certain starters.

Trayce Thompson $6 ($19, $1)
The Dodgers have deep pockets, but one of the reasons they are perpetually successful is their ability to find hidden gems like Thompson and insert them into meaningful roles. Thompson has exceled thanks to punching above his weight class against righties and mashing the heck out of the ball at Dodger Stadium. He is a 31-year-old journeyman, so I don’t expect it to be this much fun forever, but Thompson’s a great player to ride the hot hand with thanks to the strong lineup surrounding him when he plays.

Aledmys Díaz $5 ($11, $1)
One reason I recommend playing in mono leagues is that it gives you an opportunity to find players like Díaz before people in mixed leagues start noticing them too. He rode the struggle bus (and the bench) for most of the season but has come on like gangbusters in July, hitting six home runs in 81 plate appearances for the Astros with an absurd .313/.383/.658 slash line. He has been playing all over the diamond but has primarily benefited from extra starts in the leftfield thanks to Michael Brantley’s injury. He will cool off and perhaps even lose playing time when Brantley returns but just like with Thompson the strong lineup makes him worth using while he’s getting regular reps.

Major League Baseball’s decision to move the trade deadline from July 31 to August 2 led to some additional gamesmanship on the part of AL-only fantasy managers this week. Castillo was a likely no-brainer, high-end bid for AL squads that need pitching but for teams that need offense more was it better to bid aggressively for Castillo or be more conservative and hope that Josh Bell or Juan Soto lands in the Junior Circuit today or tomorrow? The winning bidder in AL Tout held the FAAB hammer and simply used it, but in my other AL league the team with the most FAAB held off on Castillo.

The team with the second most FAAB bid aggressively on Peralta, which was the more surprising move. If tomorrow’s deadline is a dud, then this was a shrewd bid. If Soto, Bell or someone else more significant than Peralta switches leagues then this is going to hurt. Peralta isn’t nothing but the more tepid bids behind the winning $687 bid show that many of the other experts had the same thought process I did. I only bid $13 in my $100 budget AL-only local league in the hopes someone better comes over tomorrow night.

Jeff Erickson of Rotowire was outbid on Castillo, Peralta, Kaprielian, and Raley, and was forced to add Junk to his team.

We’ve been hearing about Díaz for years now but it’s likely he’s up in the majors for good, particularly if the Marlins sell in any appreciable way tomorrow. He hasn’t done much yet in 2022 but has pop and a decent batting eye that should offset a subpar batting average with walks. He might sit against lefties, which would be a minus in a mixed league but not here. Falter has had some decent outings here and there, but his peripheral numbers are ugly. The proclivity to surrender home runs makes him extremely risky at home, and even with a soft landing spot against the Nationals this week he’s still a risky play.

Thank you for reading

This is a free article. If you enjoyed it, consider subscribing to Baseball Prospectus. Subscriptions support ongoing public baseball research and analysis in an increasingly proprietary environment.

Thierry Weil (FIH): Take it or leave it!

Russell Westbrook: “I have to do my job”