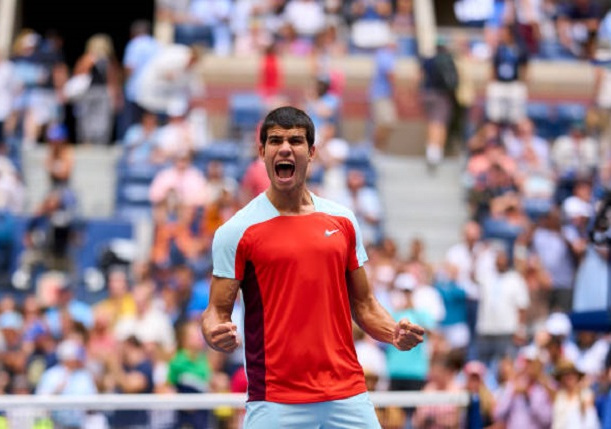 Carlos Alcaraz’s arrival and Serena Williams’ farewell made this a most memorable US Open—and a massive ratings winner for ESPN.

The Bristol, Connecticut-based network reports its 2022 US Open coverage earned an audience increase of 50% from 2021 and is the third-best ever ESPN Grand Slam performance.

More: Alcaraz Wins US Open, Rises to No. 1

The 2022 US Open on ESPN averaged 1.21 million viewers over the two weeks and nearly 168 hours of wall-to-wall live coverage, up 50% from last year and the third-best for ESPN since it gained exclusivity for the last of tennis’ four Majors each year in 2015.

ESPN reports “The audience was boosted during the first week by the widespread attention to Serena Williams – who was featured three times in prime time plus in a doubles match with her sister Venus – who most believe was playing her final tournament and in the second week by matches with Frances Tiafoe, Coco Gauff and eventual men’s champion, Alcaraz.”

The semifinal between Alcaraz and Tiafoe on Friday, September 9th, averaged 2.96 million viewers – peaking at 3.6 million – for the five-plus hour telecast that started at 7 p.m. That is up 66% from the equivalent telecast in 2021 and ranks as ESPN’s ninth biggest tennis audience on record. It is also ESPN’s sixth best from the USTA Billie Jean King National Tennis Center in Flushing Meadows, N.Y. (coverage began in 2009).

It is ESPN’s biggest tennis audience for a match from a major that did not include the legends of the last 20+ years – Novak Djokovic, Roger Federer, Rafael Nadal and Serena Williams. Not only is it the only semifinal in ESPN’s top 10 tennis audiences, but when combined with the afternoon semifinal, Casper Ruud over Karen Khachanov, the 2.2 million average audience is the biggest for the penultimate round of any tournament ESPN has televised.

The entire 5.5-hour prime-time telecast averaged 2.3 million viewers, up 289% over last year’s equivalent telecast. It is ESPN’s most-watched Early Round (Rounds 1-3) telecast in its US Open history and ranks ninth on the list of ESPN’s most-watched US Open telecasts ever (at the time). The Serena Williams vs. Anett Kontaveit match averaged 3.6 million viewers and peaked in the last quarter hour (9:30-9:45 p.m.) with five million viewers. Williams vs. Kontaveit helped ESPN lead all networks – broadcast or cable – among Men and Adults among 18-34, 18-49 and 25-54 in prime time. ESPN ranked as the second most-viewed network among households and P2+.

ESPN’s most-watched Day Four of the US Open ever (1.0 million viewers). ESPN2’s prime-time telecast including the Williams sisters’ doubles match was the third most-viewed Third-Round telecast ever on ESPN networks. The entire telecast averaged 1.5 million viewers, up 131% from the same night a year ago. The Williams Sisters’ match averaged 2.2 million.

The Serena Williams vs. Ajla Tomljanovich third-round match was the most-watched tennis telecast on record in ESPN’s 43-year history: an average of 4.6 million viewers (P2+). (The previous record of 3.9 million was for the 2012 Wimbledon Gentlemen’s Championship, when Roger Federer defeated Andy Murray).

The prime-time telecast was the most viewed telecast of the day for broadcast and cable networks in total viewers and all key male and person demos. Focusing on the exact time of the match, it averaged 4.8 million viewers from 7:15 p.m. – 10:30 p.m. ET and peaked with 6.9 million viewers in the 10:15 p.m. quarter-hour.

Monday afternoon’s upset victory by Frances Tiafoe over Rafael Nadal. earned an average audience of 2.4 million fans, peaking at 3.4 million. The entire 11 a.m. window of nearly eight hours delivered an average audience of 1.7 million viewers, up more than double – 113% – over the same telecast last year. Tuesday’s prime-time telecast on ESPN averaged 1.8 million people, 75% higher than the same night in 2021. The Day Nine audience peaked at 2.6 million in the late stages of Coco Gauff dropping a quarterfinal match vs. Garcia.

Support for growing the game for Women and Girls 

Bowdon opened the campaign in Division 1 North by taking a third successive victory against West Yorkshire-based...