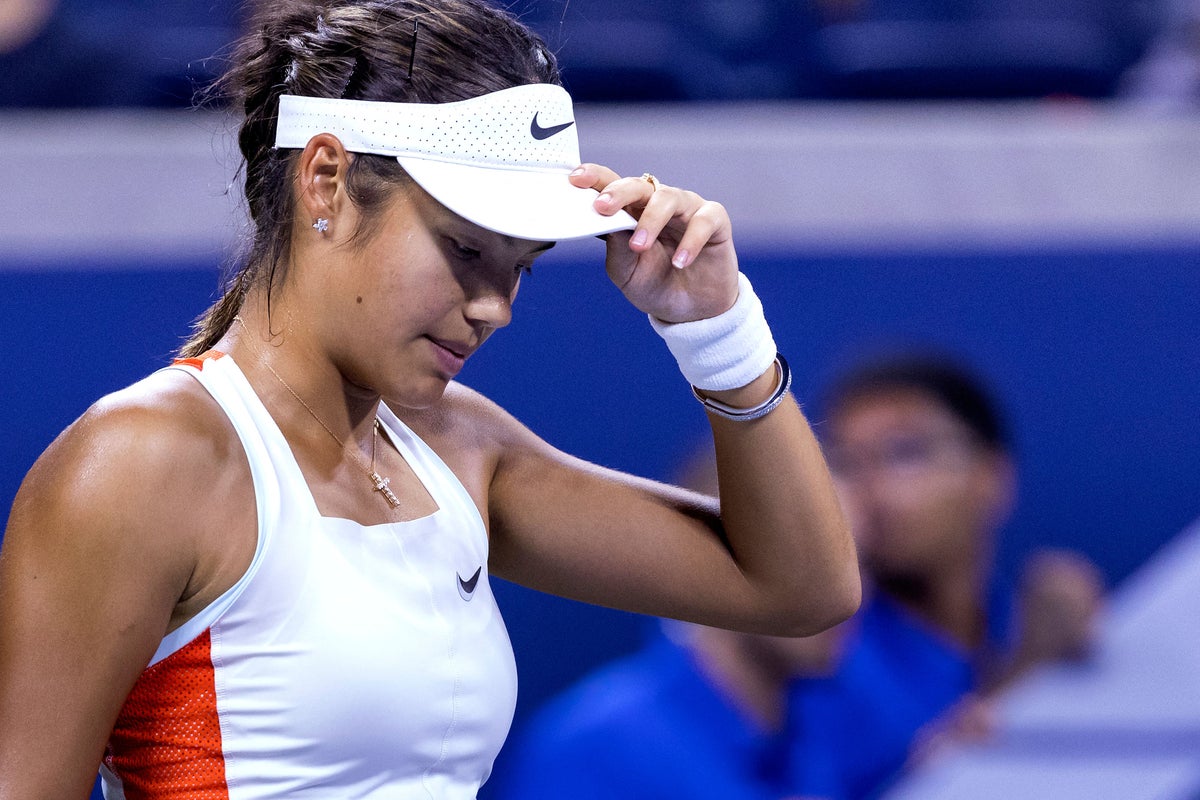 or Emma Raducanu, lightning couldn’t strike twice and hopes of emulating her fairytale of New York a year ago fell at the first hurdle.

The US Open defending champion had gone into her opening round match insisting there was no pressure despite the events of 12 months ago.

But facing one of the toughest first-round draws against one of the most experienced players on tour, Alize Cornet, was always going to be a hard task.

And so it proved, Cornet, a player who labelled herself the “upset girl” having reached the quarter-finals of the Australian Open and ended Iga Swiatek 37-match winning streak at Wimbledon, proving too good for the 6-3, 6-3 result.

There were moments where Raducanu threatened to ignite with the style of aggressive, almost carefree tennis that won her a shock title last year but, against the mercurial talents of Cornet, she could not settle into her rhythm.

Defeat was not a major shock off the back of a tough year for the 19-year-old in which she has struggled for fitness and consistency on Tour. Cornet, the world No40, was playing in her 63rd straight Grand Slam. For Raducanu, it was only her sixth in total.

Prior to the match, Raducanu had not dropped a set at the US Open having previously come through three rounds of qualifying and the entire main draw without a blemish to her record.

The Briton had her serve broken seven times in all but closely matched Cornet for much of a relatively tight, undulating first set after which she needed a medical timeout for blisters.

Blisters, among other injuries, have been a blight of her first full year on tour. On the eve of the tournament on Friday, the No11 seed was seen in tears on court and received treatment on her wrist. She later downplayed it as “one of those bad days”.

It was perhaps surprisingly not a sell-out on Louis Armstrong Stadium for the defending champion, who was clearly the fans’ favourite. There was the signs of a comeback after recovering from a break down in the opening set to go to 3-1 before being hustled off court for the remainder by a wily Cornet.

“Obviously, really disappointing, really sad to leave here,” said Raducanu following her first-round exit. “This one obviously hurts a bit because it’s probably my favourite tournament. But also in a way happy because it’s a clean state. I can just start again.

“I don’t know what my ranking will be. Probably pretty low down. With perspective, actually as a 19-year-old, I’ve not had a bad year. To be top hundred, if you told me that a year ago, I’d take it. I’m going to drop down the rankings, climb my way up. In a way, the target will be off my back slightly. I just have another chance to claw my way back up there.”

She will drop more than 2,000 points in the rankings, which will in turn see her plummet to something in the region of 80th in the revised rankings post-tournament. In so doing, she may even lose her status to Harriet Dart as British No1.

The blustery conditions in the New York night did not necessarily play to Raducanu’s strengths as a confident Cornet, at 32 in potentially her last year on the tour, dictated the match.

“The way that the conditions were, it was quite difficult because the ball was moving around for me to really swing,” said Raducanu. “Alize’s defence was pretty good. I thought she was just scrapping everything back.

“There were like junk balls in the idle of the court. With the wind blowing around, it was really difficult. She just kept getting it back. I’m proud for putting myself out there every match, every day, knowing I’m pushing myself to be the best I can.”

SHANGHAI, BAODING MAKE IT TWO ON THE TROT IN CHINESE MEN’S SUPER LEAGUE

Who Is the Best Badminton Player of All Time? 9 Top Badminton Legends