The Dodgers and infielder Max Muncy have agreed to a contract extension, according to an announcement from the team. Under the previous extension he signed with the Dodgers, they had a $13MM club option for his services in 2023. That will now become guaranteed at $13.5MM, with the Dodgers now holding a $10MM club option for 2024, plus incentives. Jack Harris of the Los Angeles Times reports that there’s no buyout on the 2024 option.

Fabian Ardaya of the Athletic (Twitter link) provides a breakdown of the escalators on Muncy’s option, which are based on his plate appearance tally in 2023. The option price would increase by $250K apiece for reaching 50, 250, 300 and 350 plate appearances next season, followed by an additional $500K at 400 and 450 plate appearances and an extra $1MM at each of 500 and 550 PA.

This extension is a bit of an early birthday present for Muncy, as he will turn 32 years old on Thursday. The lefty slugger was a late bloomer by major league baseball standards, having his breakout season in 2018 at the age of 27. That year, he hit 35 home runs and slashed .263/.391/.582 for a wRC+ of 162, indicating his offense was 62% better than league average.  In 2019, he proved that it was no fluke, hitting 35 homers again and slashing .251/.374/.515 for a wRC+ of 133. He also provided defensive versatility in that time, moving between first, second and third base.

After those two strong seasons, Muncy finally reached arbitration for the first time in his career, at the age of 29. He and the club didn’t come to an agreement, with the club filing for $4MM while Muncy’s camp submitted a $4.675MM figure. Before the hearing took place, the two sides agreed to a longer-term pact, running through 2022 with the option for 2023. Since Muncy was on pace to reach free agency after 2022, that extension effectively relinquished one year of free agency while allowing him to guarantee himself $26MM in future earnings, and potentially more. 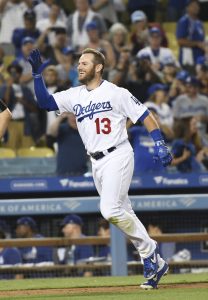 Muncy slumped a bit during the shortened 2020 campaign but was excellent in the postseason, helping the Dodgers win their first World Series title since 1988. Last year, he got back to the pace he established in 2018 and 2019, as he hit 36 home runs and produced a batting line of .249/.368/.527, wRC+ of 140. Unfortunately, he injured his arm in a collision at the end of the season, an injury which prohibited him from participating in last year’s postseason.

That injury has seemingly lingered into 2022, as Muncy spent time on the injured list due to left elbow inflammation and struggled over the early parts of the season. However, the good version of Muncy has been roaring back recently. Through the end of July, he was hitting .161/.310/.303 for a wRC+ of 82. Since the calendar flipped to August, though, he’s hit seven home runs and slashed .328/.409/.776, increasing his wRC+ for the season to 105.

That August line is still a small sample of just 66 plate appearances, but the Dodgers evidently have enough faith in Muncy that they are willing to re-up with him for one more year. If that show of faith pays off, they will be rewarded by having the ability to keep Muncy around for yet another season. It also helps reduce a bit of uncertainty in the club’s infield picture. The Dodgers held club options over both Muncy and Justin Turner, while Trea Turner is slated to become a free agent in a few months’ time. While it was possible to envision a scenario where all three ended up in new uniforms next year, now the club knows that it at least can count on Muncy to take a spot somewhere on the diamond. There’s also uncertainty in the outfield, with Joey Gallo heading into free agency and Cody Bellinger a potential non-tender candidate. With players like Muncy, Chris Taylor, Gavin Lux and others bringing that multi-positional skillset, they’re in a good position to navigate their options in the offseason.

For Muncy’s part, he can finish the season and go into the playoffs with the peace of mind of having his 2023 salary locked in with a slight raise. The details of the incentives aren’t yet known, but that potentially provides him a chance to secure some more earnings as well.

Fabian Ardaya of The Athletic was among those to report the extension before the official announcement.

The Santander Winds Are Blowing Out

Carlos Alcaraz's behind-the-back shot is by far the sickest shot of the 2022 U.S. Open