American Nicole Melichar-Martinez and Australian Ellen Perez have been beaten in the US Open 2022 women’s doubles semifinals. 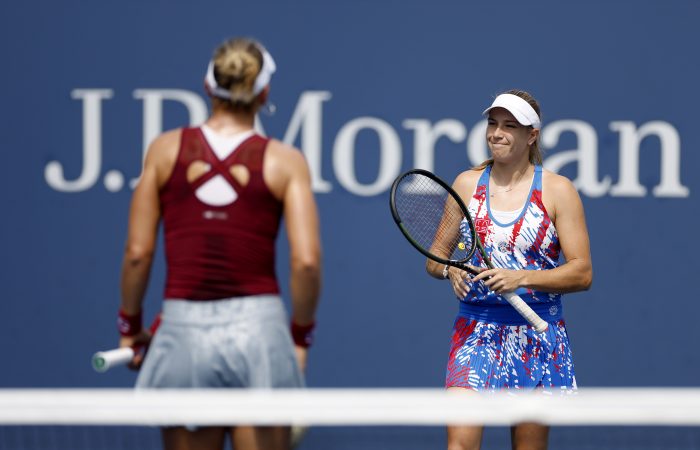 The career-best run of Australian Ellen Perez in the US Open 2022 women’s doubles competition has ended in the semifinals.

World No.3 Siniakova and world No.7 Krejcikova made a blistering start, racing ahead 4-0. They maintained this advantage to wrap up the opening set in 38 minutes.

Perez and Melichar-Martinez fought back, taking control early in the second set. They built a 5-2 lead and had two chances to serve for the set, but were broken both times.

The No.10 seed’s aggressive play paid off in a second-set tiebreak, keeping their hopes alive as they levelled the match at one-set apiece.

But Siniakova and Krejcikova proved why they are five-time major champions, with the reigning Australian Open and Wimbledon champions stepping up to regain momentum in the deciding set.

The Czech pair closed out victory in two hours and 16 minutes to advance to their first final in New York.

Siniakova and Krejcikova are now one win away from completing a career Golden Slam (winning all four Grand Slam titles plus an Olympic gold medal) in women’s doubles – a feat only previously achieved by Americans Gigi Fernandez, Pam Shriver, Venus Williams and Serena Williams.

This result snaps an eight-match winning streak for Perez and Melichar-Martinez. But there is a silver lining for world No.26 Perez, who is set to make her top-20 debut after the tournament.

Perez had been aiming to become the 11th Australian to advance to a US Open women’s doubles final in the Open era.

That honour may now go to one of Perez’s close friends, Storm Sanders, who will compete in her semifinal tomorrow.

Sanders and American partner Caroline Dolehide face the all-American combination of Caty McNally and Taylor Townsend in the other semifinal.

Aussies in action – US Open

Detailed description of the app and its features by Linebet. Instructions for installing and downloading the app...