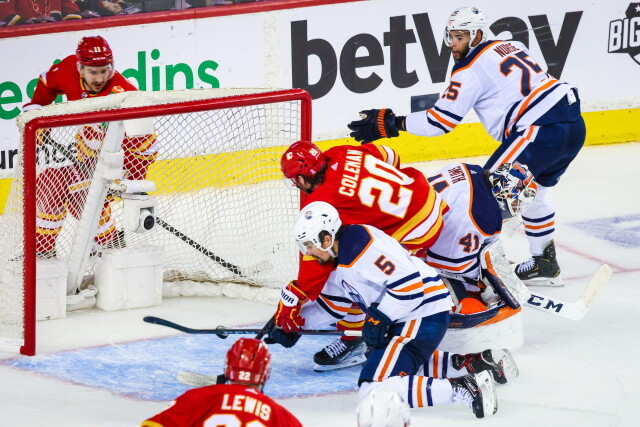 The NHL Season is right around the corner. Rookie camps and tournaments have wrapped up. Training camps along with the preseason are underway. There are a lot of familiar faces in new places to begin the season.

The start of a new season brings hope as teams look to build towards the playoffs and dethrone the Stanley Cup Champion Colorado Avalanche.

Welcome to the divisional rankings. We’ll look at both the Eastern and Western Conferences, ranking teams in each of the four divisions. Next up in the NHL Divisional Rankings series is the Pacific Division.

It is not out of the question the Flames are a better team this year than they were last year. At least a more complete and deep team than they were last season when they lost in the second round of the Stanley Cup Playoffs to the Oilers. Out are Johnny Gaudreau, Matthew Tkachuk, and Sean Monahan in are Jonathan Huberdeau, MacKenzie Weegar, and Nazem Kadri. The Flames, under Brad Treliving are constructed better for the Darryl Sutter led Flames than in years past. They are a grittier team that will fight until the very end. With the extension for Huberdeau, the trade grade for Treliving went up. Can he close the deal with Weegar is the next question? Defense is a question mark, but with Jacob Markstrom, the Flames should contend for the division title again. There is no reason why the Flames can’t finish this NHL season atop the Pacific Division again.

Vying for the divisional title will be the Edmonton Oilers. As previously stated, the Oilers beat the Flames in the latest edition of the Battle of Alberta. But Ken Holland had issues to address in between the pipes this off-season. He knew, as a matter of fact, the whole hockey world knew. An aging Mike Smith was not going to get this team over the finish line. So what did Holland do, he went out and signed Jack Campbell. Campbell is coming over from the Maple Leafs guiding them to the playoffs. Edmonton is hoping Campbell will have the same success. Both teams have similar defenses and with Duncan Keith retiring, the Oilers defense will be an issue. Upfront, the Oilers re-signed Evander Kane, Kailer Yamamoto, and Jesse Puljujarvi, though the Oilers are still looking to move Puljujarvi. This team should still make the playoffs but need more than Leon Draisaitl and Connor McDavid to score.

The Kings are an interesting team this season. Expectations are high for them coming into this season. Unlike last year, where nobody expected them to make the playoffs. Los Angeles was a year ahead of schedule. The Kings are a team that is trending upwards in the Western Conference. Dustin Brown has retired, but LA made a big splash trading for and signing Kevin Fiala to a long-term extension. The Kings bolstered their scoring as they acquired Viktor Arvidsson the year before. Adding Phillip Danault allowed Anze Kopitar to be more offensive last year. Outside of goaltending, where Cal Peterson has to take the next step, the Kings can’t rely on an aging Jonathan Quick to turn back the clocks again. The x-factor will be Quinton Byfield as many people expect him to take the next step this season.

Here is where things get interesting in the NHL Pacific Division. Bruce, There It Is, and the Vancouver Canucks fell short of the playoffs last season. The coaching change in Vancouver did wonders for the team. Can it carry over into a full season remains to be seen. Even with all the chatter of Brock Boeser and especially J.T. Miller being traded, both players re-signed with Vancouver. Keeping Miller was huge as he led the Canucks last season in all offensive categories. Miller had 99 points and 67 assists and tied with Elias Pettersson with 32 goals. Keeping Miller allows the Canucks offense to be more dynamic. Bruce Boudreau has set expectations high saying “missing the playoffs would be a huge disappointment.” The Western Conference is tough and Vancouver is hoping their core and goalie Thatcher Demko can get them into the playoffs. But it will not be easy especially with their defense being the weakest link.

Already things do not look good for the Vegas Golden Knights, who just missed the playoffs last year. Vegas had the team last year to make the playoffs and should have, but losses to weaker opponents kept them out. This year that has to change, but the Golden Misfits as they were once known have the mentality of Championship or Bust. Because what made Vegas so successful is the reason why they are coming up short. The core guys and the mentality of everyone against us is gone. Now Vegas is the team that goes out and gets the high price ticket but ruins the chemistry that was there. That is what happens when an expansion makes the final their first season. Robin Lehner is lost for the season. Laurent Brossoit will be out for half of the season. Vegas is relying on Logan Thompson, who had a good second half of last season and World Championship and Adin Hill. Not the confident pair the Golden Knights wanted in the net. They went from having the best tandem with Fleury and Lehner to a so-so one. Max Pacioretty was traded for nothing in the off-season. Vegas hopes Mark Stone and Jack Eichel have bounce back years. A healthy Eichel is the x-factor in Vegas’s season. With new head coach Bruce Cassidy, the Golden Knights are hoping Eichel can score and the power play which let them down so often gets fixed.

It is all about the youth movement in Anaheim. With Ryan Getzlaf retiring, the Ducks are Trevor Zegras‘s team now. Also add in defenseman Jamie Drysdale and forward Troy Terry. Zegras is such a fun kid to watch play the game. It was strange that Sonny Milano got cut, but general manager Pat Verbeek is making some moves that will allow the Ducks to spend money later on. Hampus Lindholm was traded at the deadline last year along with Josh Manson. Despite rumors of John Gibson wanting to be traded, the Ducks goaltender remains steadfast on getting through this rebuild with this team. Adding Ryan Strome and John Klingberg give the Ducks added depth, but it will be a difficult climb in a tough Pacific Division.

Another team in a rebuild that was once a contender is the San Jose Sharks. The Sharks tied up more than half their salary cap in defencemen. The opposite of what the Toronto Maple Leafs did, who tied half their salary cap in the offense. This offseason new general manager Mike Grier got to work reshaping the Sharks and making unpopular decisions similar to what Bill Guerin did in Minnesota. Brent Burns was traded to Carolina as the Sharks slashed his salary from their payroll. However, Erik Karlsson and Marc-Edouard Vlasic‘s contracts are still on the books. Though Karlsson denies wanting out, the Sharks are looking to slash more money. Prior to the GM change, Tomas Hertl signed a new eight-year extension worth $8.135 million a season. All eyes will turn to Timo Meier this season as he is a pending RFA at the end of this season. Does Grier see him as part of the future or does he try to move him at the deadline? That is something to watch for a team rebuilding and going to miss the playoffs again.

At the bottom of the NHL Pacific Division again will be the Seattle Kraken. The second season for the Kraken will be better than their first, but in terms of playoffs, they are a long way away. The team is hoping Philipp Grubauer can have a bounce-back season after his initial year in Seattle. Offensively, the Kraken are just as weak as they were last season. Even with the addition of Alexander Wennberg, the Kraken offensively are not as good as they could have been if they drafted the right way. Yanni Gourde is a great role player but carrying the offense is another story. The future is bright for the Kraken with Matty Beniers and Shane Wright down the middle.

Effectively Wild Episode 1908: A Movie Script Ending (to the Season)?

looking for pc software to manage queing at our club

What to Expect When You're Taking a Golf Lesson