The Philadelphia 76ers enter the 2022-23 season with an almost identical roster as the prior year. There were no major casualties. Losing veterans Paul Millsap and Deandre Jordan would not be considered losses, as each player had been diminished to a shell of their once-All-Star selves, as Father Time would have it. In Philadelphia, the level of talent is there. The MVP-caliber players are there. The buy-in is there. What does it take for the Philadelphia 76ers to take the next step?

Considering the fan base, maybe they are just the most enthusiastic (I am going high road), but the city has been somewhat forgiving to the 76ers. They have been a good regular season team but have not tasted gold in ages. The city is yearning for a return to those glory days. The Flyers, meh – that ain’t happening any time soon. The Jalen Hurts Show has taken flight, accompanied by A.J. Brown, and after two weeks through the NFL schedule the Eagles are flying. The Phillies? They do offer a talented ball club – Kyle Schwarber, the defending National League MVP, Bryce Harper, and Nick… as there is a drive into deep left by Castellanos and that’ll be a home run. A team worth watching, but the best, and simultaneously, the most underwhelming team in town is the Philadelphia 76ers. They will be contenders, again. Can they make it through the Eastern Conference to compete for the ultimate prize?

Tyrese Maxey: The little engine that could is Maxey, who is the most underrated guard in the NBA. If I wrote this two months ago, I would have leaned Dejounte Murray. Based on some recent developments, though, I do not think Murray’s maturity warrants that tag. (More on that later in the Atlanta Hawks preview). Tyrese does not only command respect, but he takes it. For those who were not paying attention late in the season, and the playoffs, Philadelphia’s point guard established himself as a star in the National Basketball Association. He fears no one or no moment. He wants the ball in his hands and is not afraid to make decisions. His development is ongoing and the 76ers have a star in the making.

Joel Embiid: Perennial MVP candidate and, possibly, the best big man in the league, Joel is also one of the most competitive players in the league. He wears his emotions on his sleeve and is openly critical of his own play and that of his teammates. The 76ers finished the regular season 22 games over .500 but were 6-8 without Embiid in the lineup. His health is paramount to all. Philadelphia will look to protect Joel at every turn. This may not be what fantasy players want to hear, but expect Embiid to finish the regular season with a lot less miles than usual.

James Harden: I will start with: THE DEFENSE IS BETTER THAN YOU THINK. YouTube videos will have you thinking he is the worst defender in NBA history but that is not the case. Harden does need to be more involved on the defensive end of the ball this season, but he is more than capable. I have questioned his desire to guard but not his ability to do so. He also needs to continue his unselfish play from last season. Harden has never had an issue banking assists. The final tallies always have been favorable for an all-around great offensive line, however, defaulting to Embiid and others (citing better shot selection) is the style of play that may finally get Harden that elusive championship ring.

P.J. Tucker: One of the most underrated defenders in the NBA is P.J. You may remember the jests with Kevin Durant. One thing that was not covered with significance was the trouble Tucker gave to the best scorer in the league. It is real. Not only does Tucker cover with great efficiency on the perimeter, but he is also the “Corner Three King.” This will prove to be instrumental in the 76ers’ success. There is room for improvement from deep but Tucker does not miss a beat when the game is on the line. He is literally the exact same payer regardless of game situation. This is the perfect addition to the 76ers team. A blue collar grinder for a blue collar team.

Montrezl Harrell needs to be a significant factor: One thing the Philadelphia 76ers have not been able to escape is at least one or more Joel Embiid injury concerns during the season. Harrell signed a two-year/$5.3 million contract in the offseason. This may turn out to be the best signing in the NBA. It will, without a doubt be the most important free agent signing for the 76ers in years. Sparing Embiid, and allowing him regular rest is how they preserve the big man for the stretch run and playoffs.

The team’s ability to make perimeter shots is very instrumental in their success: The inside-out game with Embiid in the post is at its best when there are multiple outside threats. We know Joel will get to the line and probably do so more than any player in the league, but consistent outside shooting is mandatory to be the best team in the East. Philadelphia finished 7th in 3-point field goal percentage last season, but 22nd in 3-point makes. Simply put, they do not attempt enough threes.

The player with the most to prove is Tobias Harris: It was a down year for Tobias. Normalcy was not always a thing in Philadelphia last year, so some grace is given, and while things may have not been completely ideal, Harris has the most room from improvement year-over-year. Harris turned in another solid campaign, but despite getting 2.3 more minutes per game, he declined in PPG, 3-point percentage, rebounds, blocks, field goals%, and free throw percentage. The veteran is in a good position to contribute and get back to his 2020-21 form. 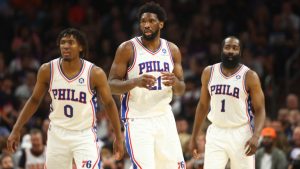 It will be interesting to see how the Big 3 plays once together for a full season. Joel Embiid, James Harden, and Tyrese Maxey have all the makings to be the best Big 3 in the NBA. Maxey is one of the most improved players I have seen in-season. The leap Maxey took during the 2021-22 season was nothing short of remarkable. He positioned himself as a top 10 point guard.

“The biggest inflection point is, probably, we need Maxey to take another step forward. And he can do it. He’s putting the work in… His rookie year was way ahead of schedule. His second year was way, way ahead of schedule, and to ask him to do another leap forward is asking a lot, but we do need it. I wouldn’t be surprised if he does it given how much time he puts in.” –  Sixers president of basketball operations Daryl Morey

Did James Harden adjust his contract for the betterment of the team or to pack on some longevity to his career? This is important because if James agreed to amend his extension to allow the 76ers more flexibility, it shows he is serious about winning. If Harden is willing to do whatever it takes to win, this will be a great season for the team.  All indications are egos are non-issues for the 76ers, including James. You love to see it.

Joel Embiid will show up. Barring injury, he will be back in the MVP conversation. The city of Philadelphia will be excited to see the three on the court together from season start to finish. The Philadelphia 76ers will be one of the favorites for the Eastern conference.

Not only is there pressure on the team to produce, but head coach Doc Rivers has tremendous pressure to perform. Doc does have one ring from his time with the Boston Celtics, but after being given some of the better rosters in NBA history, many would consider the one championship a failure. Doc would like a title as much as the players would.

The Philadelphia 76ers will start the season without the Ben Simmons drama which plagued the team for months last season. With that distraction gone, the team can focus on winning games and trying to bring a title to the city of Philadelphia for the first time in since 1983.

Postseason: Loses to Brooklyn in the Conference Finals

LeBron James And Anthony Davis Out For Lakers vs Toronto Tonight

Hunter Brown Camouflages His Stuff Well In His Debut